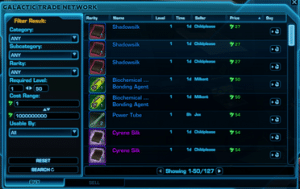 I remember at Guild Summit when we first all noticed GTN access from your ship. A friend sitting near me said “But I noticed it’s neutral. Is there not going to be a regular one on our ship?”

It was a legitimate question because on my server and the servers of nearly anyone I have asked, the neutral GTNs are mostly dead. There’s hardly anyone who uses them and little point of putting anything on them because they never sell. We suspected at that time that maybe BioWare had plans of doing something different with the GTNs in the future.

About 20 minutes into this conversation with Daniel Erickson, it is revealed that they plan to merge all GTNs to neutral access at some time in the near future.

Players are discussing this on the forums already and one has laid out the good and bad points of this decision very concisely:

1. Griefing by undercutting
2. Clutter from tons of faction restricted items
3. Deflation due to a larger market/more undercutting

I pretty much agree with these points. I think in the big picture it will be a good thing, although there are some potential problems that can come of it. So what do you think about the change?