Lucasfilm apparently snuck a trailer for their 3D rerelease of Star Wars: Episode I—The Phantom Menace into theaters this past weekend, where it played in front of such not-screened-for-critics fare as The Three Musketeers 3D. (Sadly, I missed Musketeers because I was at Paranormal Activity 3 instead, thinking not so much about that movie but rather about the lady who had brought an incessantly screaming infant to a movie made up of little more than cheap jump-scares.) Here is is:

It’s a weird trailer, but if you’ll allow me to get even geekier than usual for a second, it’s interesting to see how it takes a very different approach from Episode I’s original trailer (which I still think is pretty impressive, and which I still have fond memories of watching over and over in a friend’s dorm room on her slow-ass computer, looking at every goddamn frame for evidence of how amazingly awesome Phantom Menace was going to be). Like the poster, this trailer hypes the experience of seeing Star Wars—any Star Wars—on the big screen, and it also includes roughly 8,000 percent less Jar Jar and 400 percent less crappy puppet Yoda. You work with what you’ve got, I guess, but I’ll be curious if later trailers for the other all-but-inevitable Star Wars 3D rereleases will focus more on the story elements and less on the desperate sentiment that equates to IT’S BASICALLY STAR TOURS BUT YOU DON’T HAVE TO GO TO DISNEYLAND ANYMORE. PODRACING! 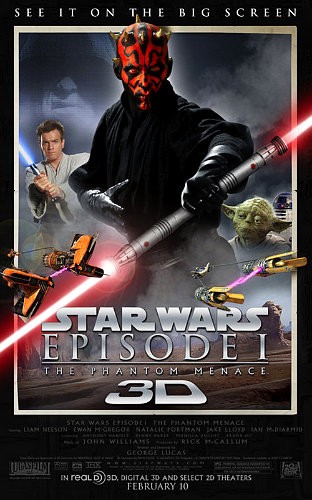