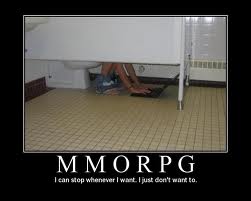 Particularly in the west, the massively multiplayer online role playing game genre has been struggling for a number of years – the huge time investment required alongside an aging core audience who now have different priorities in their lives have left many of the games to slowly wither and with the biggest names still holding on to their core, numbers are certainly shrinking.

Whilst the previously mentioned factors are a big reason for the impact in reducing player base, another reason has been a shift in gaming platforms as many of us have made the swap to gaming on our smartphones along with many others – a change to more casual games such as online casinos that can be clicked in and out of at a whim without much investment required, and despite recent adjustments in regulation a growing number of operators are registering in different countries to avoid initiatives such as Gamstop, you’ll find them listed here as they’re becoming increasingly common for many players.

There may be some good news for MMO fans though as hype has started to build a little for some upcoming releases – the biggest is the next expansion for World of Warcraft set to release a little later this year in Shadowlands, but with WoW being the biggest MMO in the world there’s nothing really new, leading many fans to eagerly await two brand new titles – New World which has been developed by Amazon Game studios has recently been delayed until Spring 2021 but has become a very hyped new game as the money behind it with Amazon could promise big changes with development and stability but with nothing really new here there is some expectation that it could just be more of the same.

Ashes of Creation has been the other title gaining a lot of traction as a recent developer interview last week with popular streamers Summit1g and Shroud had shown a lot that had been planned and implemented into the game finally start to ring true – it was a big project initially launched with private funding and a successful Kickstarter campaign in 2016, with much of what had been promised seeming a little too ambitious, but showing these features actually functional in their alpha is a huge step forward. The game will launch with a subscription model and promises no buy-to-win features, something plaguing western titles in recent years, but with no date yet announced and a second alpha soon available it could still be quite some time until the game finds its full release.

These few titles may be the last chance for MMORPG’s in the west to boom again, with so much interest in FPS, MOBA, and Battle Royale games in recent years it may be hard to fit in with the new crowd of young gamers favouring the faster and more interactive gameplay, a big success for any of these three titles could show that there’s still plenty of life left in these big expansive worlds.