It’s been awhile since we’ve heard anything about a new game from LucasArts but it appears that could be about to change. Metro.co.uk talks about a job listing that indicates there is a new “open world” RPG in the making. This is exciting news but it also raises a lot of questions and peaks the curiosity of all types of gamers. The last title released by LucasArts was “Star Wars: The Force Unleashed II”, which seemed to leave a lot to be desired for many gamers. The idea of a new game is exciting for many. There’s no way to know if this will be something related to Star Wars, Indiana Jones or something completely different. Job ads are the most dependable source when it comes to leaning about new games but they’re very vague about the information they provide. It simply states that LucasArts is looking for more people…

Starwars.com has posted a pretty funny Robot Chicken: Star Wars Episode III video promoting the release of The Force Unleashed II. The video has only been available at the official Star Wars site here, but doing xmas, it has found it’s way to youtube. As the shift change on the Death Star passes, Stormtroopers head back to the barracks and others head out to their posts. Their one stop in common is the Imperial Cafeteria. Here, one lone coffee maker sits. Empty. Used. Un-refilled. Destined to serve millions of cups of coffee a day across the space station, the promise of the device remains unfulfilled. And Vader is not a morning person. 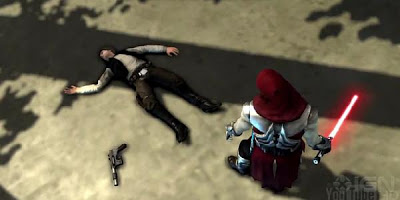 It’s no secret that both Harrison Ford and writer Lawrence Kasdan wanted to kill off Han solo in the last act of Return of the Jedi. George Lucas was against it though, so Han Solo stayed alive, and got the girl in the end. Since then George Lucas has changed his mind. Star Wars: The force unleashed II: Endor bonus Mission, let’s you – not only slaughter shit loads of Ewoks – you also get to cold blooded murder of Han, Chewie And Leia. The video is below, if you needed something to scream “nooooooooo” at. I heard there’s also downloadable content which lets you play a character who looks like you as a child, and then an NPC who looks like George Lucas rolls in on a golf cart and rapes your character. Just what I heard.

Remember those furry things from Return of the Jedi? Well now you get to kill them! After the past 2 “What if” scenario’s featured in the original Force Unleashed, LucasArts has decided to try another scenario. What if Starkiller went back to Vader? The possibilities are endless! To make it easier for our inconceivable minds, LucasArts has picked the Battle of Endor which will feature Han Solo, Chewbacca, and a lightsaber wielding Leia. The pack is released on both PSN and XBL today, alongside a character skin pack. Check out more here, and see the trailer below courtesy of Gamespot.