A new rumor is floating around and creating a lot of talk amongst Star War fans. RebelScum, from the “Star Wars action figure site”, has passed on a rumor that he’s heard recently concerning new action figures for Star War fans to collect. 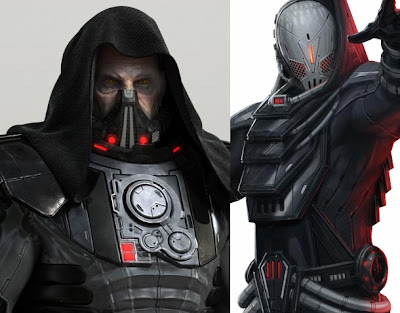 Rumor has it that a new Hasbro video game pack containing five action figures is on the way to being a reality. It’s believed this action figure set will be taken from either “The Force Unleashed II” or “The Old Republic”.
You can refer to Hasbro confirms The Old Republic action figures, to read where this issue has been discussed before, in which Hasbro’s Derryl DePriest confirmed plans to create action figures from one of these two video games in the near future. It looks as if now these plans may be taking shape.
The question on everyone’s mind is which characters will be selected? Could it be the despised Starkiller’s clone, Vader or Juno Eclipse from The Force Unleashed II or will they go with fresh characters from the video game The Old Republic? Many Star Wars fans would be very excited to see some of their favorite characters being immortalized as plastic figures such as, Darth Malgus, Darth Jadus or TZ droid to name a few.
Rumor also has it that “The Vintage Collection” may include a Trench Run Scene Pack along with the Video Game 5 figure action pack. If the rumors are correct, the Trench Run scene pack should reference Death Star and include two retooled iconic vehicles and their pilots.
According to these rumors it’s also believed that “Commander Blackout” and “Assassin Spider Droid & Clone” from the TV show “The Clone Wars” may soon be making an appearance. Of course, at this point, it’s still just a rumor and nothing has been officially announced but sometimes rumors come true.
What do you think?