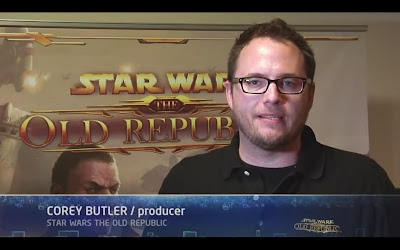 One more video was released yesterday. This time Corey Butler who is producer for Star Wars: The old Republic, gives some insights to the game. Corey gives a brief overview of SWTOR and in particular the voiced content of the game.

Corey also talks about Raids/operations were he use the term “multi-party” – a new word I haven’t heard before from BioWare, but don’t give any further details on whether there will be multiple raid sizes like 5-man raids, 20-man raids etc.

We also get a few words on personal starships, that will give us access to the galaxy map – very similar to the same system in Mass Effect and Mass Effect 2

Check out the full video below: