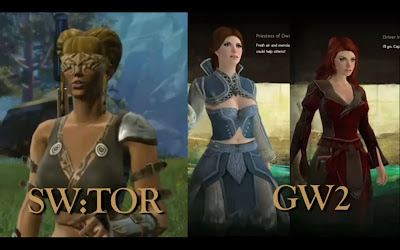 Justin Olivetti from over at Massively had a few things to say about SWTOR cutscenes- a huge part of what TOR is all about. Star Wars is all about the storyline and in SWTOR, this is one of the things that we see which sets in apart from other games, namely other MMORPGs.

But they are not completely alone in this as GW2 has some cutscene action of their own. Olivetti decided to explore this area of the game in a Leaderboard column for the popular gaming website, Massively. He says:

“OK, you knew that sooner or later there’d be a face-off between Star Wars: The Old Republic and Guild Wars 2 in this column, although today’s poll might not be what you were expecting. Instead of getting into “Which game that hasn’t released is better than the other game that hasn’t released?” let us examine each title’s approach to cinematic cutscenes.”

After a little recap of the cutscenes of each game, we’re asked for our own opinions and you eve have the chance to take vote on which game you think has the best cutscenes. SWTOR is currently leading with 59.9% of the votes. Do you agree? Disagree? Want to gab in the comments about your own opinions? Here’s your chance to get on over there and cast your vote.