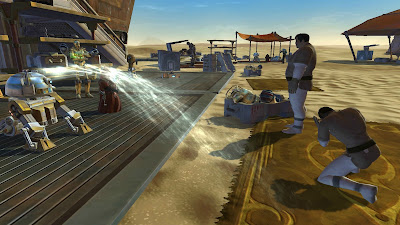 Have you recently beta tested SWTOR? If you were one of the weekend testers this past weekend, you will not need to uninstall the SWTOR client before playing the actual game. Pretty much everyone seemed to be in this massive scale SWTOR game test this past weekend so if you were dreading having to re-download the game client afterwards, you are in luck.

As long as you have the most recent version of the game client installed from the Thanksgiving weekend test, you can save some bandwidth and time and just patch the game client, rather than deleting and starting new.

“FAQ: if you played this weekend you do NOT need to uninstall the #SWTOR client. We are planning to patch it to Early Game Access / Live.”

Not only is this good news for those who plan to play but it’s also one more sign that we are closer than ever before to the eventual launch on December 20th.