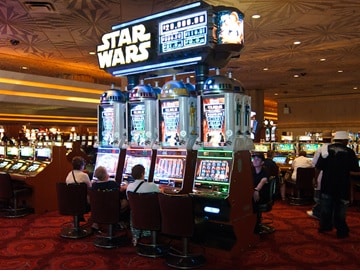 Space has always been a popular gaming theme, and especially over the past few months. After all, given recent circumstances, few of us would object to being transported to a galaxy far, far away. That’s particularly the case in the world of online slot games, which have been attracting more players than ever due to the restrictions imposed on so many physical casinos since last summer.

Here, we take a look at the space-themed games that have been attracting the most players over the opening months of 2021. Some are new, while others are classics that never seem to lose their appeal.

This NetEnt offering has five reels and 40 paylines. The wide choice of wagers makes it popular with both casual players and serious gamblers. As you’d expect from NetEnt, the graphics are top notch, with five different kinds of cartoon aliens. The Cloning Pod Re-Spin feature is a nice touch, and something that makes this game stand out from the crowd. When you score a winning combination, the winning symbols from the payline appear on the Cloning Pad to the right of the reels and are then cloned and shot back onto the reels themselves. This sets up re-spins that can create big rewards.

Here’s a very recent new offering from 1×2 Gaming that has been one of the most popular new games among players at Mount Gold Casino since it was released in early March. The game has a classic, familiar design, which is probably what has attracted so many players to it so quickly, but while the looks might be almost retro, the gameplay is right up to date. The 5×3 grid has 486 paylines and the wilds come thick and fast, giving you great opportunities through respins. It’s a nice update on a familiar theme and well worth seeking out.

Games based on TV shows usually do well, and Microgaming was right on the money with this one. It is, of course, inspired by Glen A Larson’s series that was, in itself, inspired by Star Wars, so it has pedigree on its side! High RTP and low volatility is a good combination that keeps players interested with regular rewards. There’s also a wealth of extra features that include two different types of wilds, a Scatter, a free spins bonus round and two other bonus games called Ion Storm and Jump. In other words, there’s more to this one than just watching the reels spin.

So far, we’ve had one game that’s very new and a couple that have been around for a while and had recent updates. But the most popular space game of all this year has been the most popular every year since it was released in 2012. Starburst is still the gold standard in slot games, and like a great movie or album, it is one that people seem to grow more attached to with every passing year.