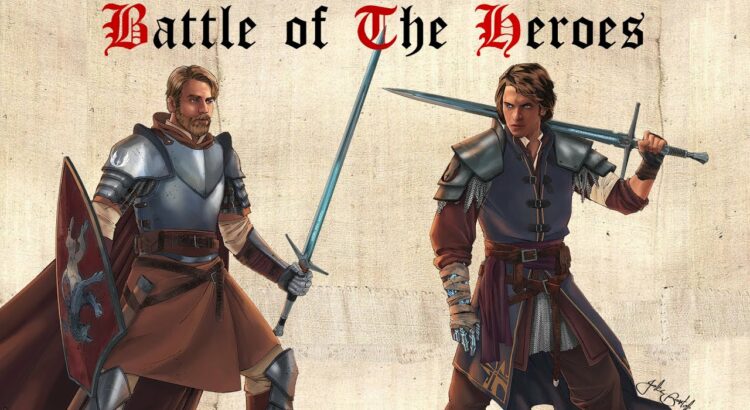 When George Lucas described a Jedi Knight as ‘a Buddhist monk who happened to be very good at fighting’, he was referring to the deep esoteric philosophy of Light and Dark, suffering and selflessness that characterised the Jedi Order. These themes would have been intimately familiar to the orders of Knights in Medieval Western Europe – here, we’ll chart the intertwined histories of Jedi and medieval chivalric knighthood, and see how understanding the past can help shed light on the Star Wars universe.

The most obvious comparison with the medieval era is that, put simply, the Jedi have medieval swords. The Jedi lightsaber is a rare and mythic weapon that surpasses all others in sharpness, and the possession of which marks the wielder out as a hero. The concept of the sword-wielding hero fighting against the forces of darkness is an extremely ancient one, but it finds its clearest expression in the Germanic folklore of the Viking era. In the Völsunga saga (first written down in late-13th century Iceland but based on a much more ancient oral tradition), the hero Sigurd possesses a sword called Gram, with which he slays the evil greedy dragon Fafnir. This sword, it is said, could cleave an anvil with a single blow. This tradition seeps into later chivalric legends like those of King Arthur’s Excalibur, and Roland’s Durendal.

Whilst there is little evidence for swords that were really that powerful, they may have been based on a kernel of truth. In the 9th century, Viking trade with the Mediterranean Islamic empires allowed them access to a special kind of steel, known as ‘Damascus steel’. Made in Sri Lanka, it was far better than contemporary Western European steels, and the swords made from it would have seemed miraculous: it would stay much sharper, and it could even notch, bend or shatter inferior weapons. Modern collectors nowadays have fantastic opportunities to begin their own collections of reproduction medieval swords, with expertly-curated collection of hand-made medieval swords – perfect for the Star Wars fan looking to delve into the historical roots of their favourite universe.

The Jedi Code and the Chivalric Code

Within the Star Wars universe, the Jedi Code is a set of rules by which the members of the Jedi Order live. As every Star Wars fan knows, the Force contains a dual nature: the Light side and the Dark side – the Jedi Code is a way for a Jedi Knight to ensure that their actions do not lead them toward the Dark. It stresses detachment from the material world, abstinence from personal relationships (both emotional and physical), and an acceptance of death as a natural part of life.

Elsewhere, for example in the earlier drafts of Star Wars’ screenplays, the Jedi Code is conceived of as a much more concrete set of prescriptions for moral behaviour. At one point, Luke Skywalker was even going to recite a ‘Jedi Oath’ before travelling to Cloud City: “I, Luke Skywalker, do swear on my honor, and on the faith of the brotherhood of knights, to use the Force only for good, denying, turning always from the Dark Side”- and so on.

It’s obvious to see how George Lucas and the other writers of the core Star Wars canon were highly influenced by Buddhist theology – Lucas himself identifies as ‘Buddhist Methodist’, and such ideas crop up strongly in the Jedi Order. The Buddhist concept of dukkha (meaning ‘pain’, ‘suffering’) is rooted in the idea that clinging to material attachments brings unhappiness – it is one of the Four Noble Truths that form the core of Buddhist thought, and whose acceptance is necessary for the journey towards Enlightenment. When, in Episode III, Yoda says “Rejoice for those around us who transform into the Force. Mourn them, do not. Miss them, do not. Attachment leads to jealousy, the shadow of greed, that is.”, he is very clearly expressing a strongly Buddhist formulation of suffering.

Rules and codes forbidding military orders from material attachments (including banning relationships and sex) are found throughout medieval history. The most famous ‘code’ of conduct for knights in the medieval period was the ‘chivalric code’, which emerged in Western Europe toward the end of the 12th-century CE. Scholars point to the codifying of a set of noble characteristics that every knight and lord should aspire to embody, such as defending the innocent, peace between Christians, honour and truthfulness, and refraining from greed and gluttony (sound familiar?).

The Pitfalls of Knighthood

Chivalry has traditionally been thought of as a noble and virtuous set of ethics that led to a harmonious and pious society in the High Medieval period – but the real history is much more complex. Chivalric ideas didn’t simply emerge spontaneously, they were promoted by individuals and organisations who saw chivalry as the ‘right’ way to behave. For example, the concept of ‘The Peace and Truce of God’, was heavily promoted by the Roman Catholic Church 11th century CE; it said that Christian nobles were brothers and that they should not fight one another. Whilst this might sound laudable, it surely demonstrates that conflict between knights was a significant problem – and it contributed to the displacement of that violence outward from Christian territories in the Crusades against the Eastern Mediterranean and Islamic states from the 1090s onwards. As well, the chivalric ideals toward women also have a more complex nature. Women (or at the very least, noblewomen) were not as disenfranchised from medieval politics as we might think: Salic law in France permitted women to inherit in their own right, and there were many strong female rulers of the era, such as Eleanor of Aquitaine. Chivalric ideals placed women on a pedestal, as objects of worship – but nevertheless as objects: passive prizes to be won rather than individuals capable of wielding power.

As a side note, many medieval knightly orders had very clear rules forbidding their members from having personal relationships or any sex at all. The Knights Templar’s rulebook, known as the Latin Rule, said that a knight joining the Order must swear a vow of chastity and give up all lands and titles – they were not even permitted to receive personal letters!

This is the more complex understanding of knighthood that has influenced a trend in the most recent Star Wars films, responding to the failure of the Jedi Order. When Yoda allows the Sacred Jedi Texts to burn in Episode VIII, we see an honest re-appraisal of what the Jedi Order was, and how it might be refounded on a better basis. With a deeper understanding of medieval history, we can gain an even better insight into the complexities of Star Wars.