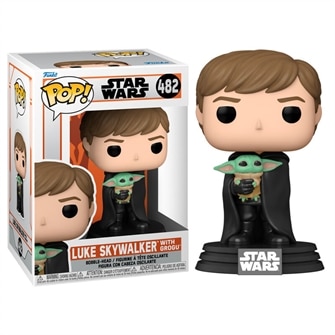 Are you a fan of the Star Wars franchise? Do you collect Funko Pop! figures? If so, you’ll want to add the Funko Pop! Star Wars: Mandalorian– Luke Skywalker with Grogu to your collection.

This highly detailed figure features Luke Skywalker as he appears in the hit Disney+ series, The Mandalorian. Standing at approximately 3.75 inches tall, this Funko Pop! figure captures the iconic character in perfect detail, from his flowing robes to his lightsaber.

But the real star of this figure is the inclusion of Grogu, the fan-favorite character also known as “The Child” or “Baby Yoda.” This adorable creature sits perched on Luke’s shoulder, adding a touch of whimsy to the figure.

Funko Pop! figures are known for their collectibility, and this Luke Skywalker and Grogu figure is no exception. It’s sure to be a hit with Star Wars fans of all ages and makes a great addition to any collection.

So why wait? Add the Funko Pop! Star Wars: Mandalorian- Luke Skywalker with Grogu to your collection today and bring a little bit of the Star Wars universe into your home. You won’t be disappointed.