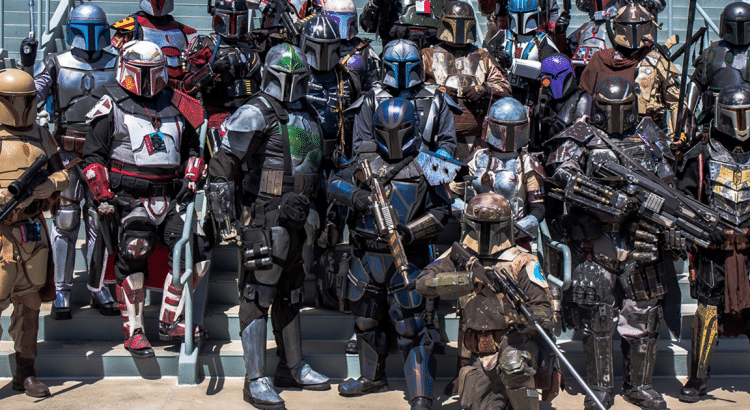 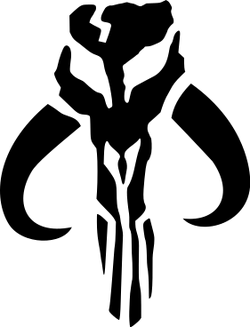 The Mandalorians (called Mando’ade in Mando’a, meaning “children of Mandalore”) were a warlike, nomadic group of clan-based people consisting of members from multiple species. Often, they served as mercenaries and bounty hunters.

Their culture revolved around that of battle and war being a source of honor and pride in their community. The leader of the Mandalorians typically took on the title of “Mandalore.” Mandalorians were frequently allied with the Sith, most notably Exar Kun and much later as a prototype for the Clone trooper under the power of Darth Sidious and the Galactic Republic, though they would not hesitate to cooperate with the Jedi if it suited them.

In later years Mandalorian Warriors wore very distinctive battle helmets with T-shaped visors that covered the entirety of their faces, which would provide inspiration for the helmets of the clone troopers. These helmets would eventually become strongly associated with the Mandalorian people.

History
“Warmaster, we think too often in terms of dualism: Jedi or Sith, light or dark, right or wrong. But there are three sides to this blade, not two, opposed and similar at the same time. The third edge is the Mandalorian.”

Originally, the Mandalorian clans were Taung from Coruscant, led by the warlord “Mandalore the First”. Around 24,000 BBY they conquered a planet in the Outer Rim, which they named Mandalore after their leader. The Taung then took the name Mandalorians and were seen by many as the most skilled fighters in the galaxy, thriving in battle. They were known for their use of cutting-edge weaponry and held to a strict code of honor. These Mandalorians wore crusader armor that differed from one soldier to the next.

For thousands of years after Mandalore’s conquest, its new inhabitants would not venture far from the system they inhabited. It was not until the Great Sith War of 4,000 BBY that the Mandalorians would seek to expand their conquests and, in the process, become famous (and infamous) to the Galaxy at large.

The Old Sith Wars
Almost three thousand years after the conquest of Mandalore, the Mandalorians wandered the Galaxy far from their home systems hoping to begin a new crusade against worthy foes. This brought them to the Empress Teta System during the period when the Krath had gained control of the system.

The Mandalorian clans became allied with the Sith after their leader, Mandalore the Indomitable, was bested in combat by the fallen Jedi turned Sith Lord, Ulic Qel-Droma. Mandalore pledged loyalty to Qel-Droma who in turn was apprentice to Dark Lord Exar Kun and in their name the Mandalorians laid waste to countless worlds in the years that followed, gaining the enmity of the Republic, and, most crucially, the Jedi.

Ten years after the defeat of Exar Kun, dozens of Mandalorians were unjustly arrested and executed after a psychotic bounty hunter named Jigger Wraith preyed upon innocents using rare Mandalorian weaponry. It was during these times that the Mandalorians would reform under Mandalore the Ultimate and begin constructing a large assortment of forces from their scattered forces. They would reconstruct defenses on Dxun as well as other Mandalorian-held worlds in order to build a mass stockpile of equipment and vessels. They would eventually be approached by the Sith and persuaded into attacking the Republic for the honor of facing “a worthy foe””.[2]
Many species comprised the Mandalorians, such as this Rodian.
Many species comprised the Mandalorians, such as this Rodian.

After their defeat in the Mandalorian Wars at the hands of the Jedi Revan and Malak, the Mandalorians went into a long decline. Revan destroyed their stockpiles of weaponry and battle droids, and exiled the clans into the Outer Rim. One group settled on Tatooine, but apparently lost contact with other Mandalorians over time.

Some Mandalorians were unable to accept the terms of their defeat, and turned to piracy, brigandage, and mercenary work – e.g. Sherruk’s group, who became bandits and troubled the settlers of Dantooine in 3,956 BBY. Canderous Ordo, who fought side by side with a redeemed Revan against Darth Malak during the Jedi Civil War, later claimed the rank of Mandalore and led a small remnant of his followers on the moon of Dxun. It was again Ordo, who traveled the galaxy with the Jedi Exile, and gathered the scattered Mandalorians who became mercenaries. Ordo was also a key in defeating the Sith Lord Darth Nihilus on the battleship Ravager.

The Mandalorian distraction was successful: they engaged the Dark Underlord’s Zeltron general and drew off his forces while the Jedi Master assassinated the dark side master, giving himself over to the dark side in the process.

A Mandalore during this era by the name of Ung Kusp was tricked into a war with the Sith; whether his war was the one against the Dark Underlord, and its result, are unknown.

With the end of the wars, and the beginning of a thousand years of peace, the Mandalorians began to forget their warrior past, and, over the next few centuries, the Mandalorians slowly transformed into a less clan-based, more mercenary-oriented culture.

In 60 BBY a schism occurred in their ranks. A violent splinter group, known as the Mandalorian Death Watch, revolted against the leadership of Jaster Mereel, who led the True Mandalorian loyalist faction, along with his Brother’s adopted son, Rotok Scarr, due to Mereel’s proposed Supercommando Codex reforms.

Eventually the civil war between these groups spilled over to the pastoral world of Concord Dawn. Here the Death Watch leader Vizsla attempted to murder Jaster. However, thanks to the assistance of a young orphan named Jango Fett, Jaster and his followers escaped the trap. Eventually, Vizsla caught up to Jaster and the Mandalorians on a distant world and, due to the treachery of fellow Mandalorian Montross, Jaster Mereel was killed in battle.

Jaster’s protégé, Jango, took over the reins of leadership, despite Montross’s disparaging comment that it would mean a “child leading them.” Jango’s tenure as Mandalorian leader ended at the Battle of Galidraan, where a Jedi task force under the leadership of Master Dooku led to the death of every remaining Mandalorian, except for Jango. Dooku remembered Jango and later employed Jango to be the Prime Clone after Dooku left the Jedi Order.

During this time, Mandalorians of an unknown faction massacred Ryyk’s family.

After this disaster, the Mandalorians were effectively ended as a fighting force in the galaxy. Individuals survived on both Mandalore and in other isolated pockets of known space, but they played little influence on galactic affairs until the Clone Wars, when Jango Fett became the template for a Grand Army of the Republic on Kamino.