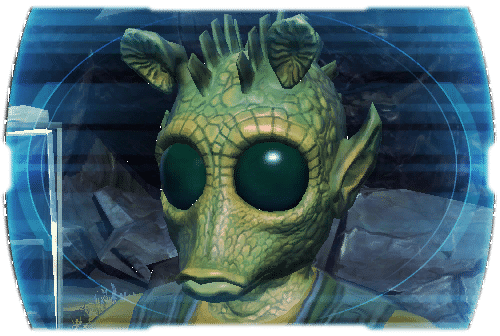 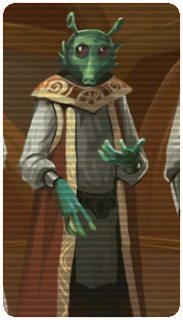 The Rodian are a bipedal race with tapir-like faces and multifaceted eyes, native to the planet Rodia, which is located in the Tyrius system. The skin of a Rodian is green in color, and there is very little physical variation within the species. Thus, non-Rodians often cannot tell two Rodians apart. The Rodian race has ears that swivel in their sockets, allowing them to hear in several directions. There is a ridge of spikes which crests their skulls, and their long, flexible fingers are tipped with suction cups.

They are a race of hunters by nature, and bounty hunting seems to hold a place of high esteem. As a race, they evolved as hunters, surviving their planet’s tropical environment and establishing a series of war games which lasted for thousands of years. When an Old Republic scout team landed on the planet, the Rodians were there to meet them, armed to the teeth. They annihilated the scout team, and the Grand Protector declared that it was time to take their skills to the stars. Since then, they have not done as well as they had hoped.

Many of the Rodians who make a living off-planet are working as bounty hunters for corrupt crime lords. Their weapon of choice is the thermal detonator, since a widespread explosion tends to kill more than a single blaster shot. Each bounty hunter is obliged to bring a valid record of his or her kill to the Guild on Rodia for logging in the record books.

Rodians almost wiped themselves out as a race, during a time when the birthrate among females dropped below the level at which they were killing each other off. Harido Kavila, the Grand Protector at the time, devised a way for the Rodian people to funnel their violent tendencies through dramatic plays. The stories revolved primarily around violence, but had a well-defined plot and used the violence to magnify the emotional impact of the plays. The Rodian dramas became well-known throughout the galaxy, in part because they were strong dramas but also because they portrayed the full impact of violence on the perpetrator and his victim.

Despite the Rodian thirst for violence and a history marked by interclan wars, the Rodians have a rich culture. Harido Kavila, a renowned Rodian Grand Protector, further attempted to steer the violent tendencies of the Rodian people into a more constructive direction by encouraging the production of drama. Rodian theater works are now among the most poignant, well-respected, and violent productions in the galaxy.

Suvam Tan
Suvam Tan was a merchant that lived in a space station in the orbit of Yavin. He slod weapons, armors and shields and only had prototypes in his stock. He also was a Pazaak player.

Twitch
Twitch was a duellist on Taris that preffered to use two blasters. He had an uncommon style to fight and was popular amongst the audience. Although he was practically insane, he was the last combatant in the ring, only beaten by Bendak Starkiller.