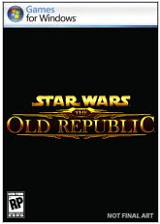 Could Star Wars: The Old Republic be coming out in September after all? According to ShopTo, an online UK retailer, it might be. After a recent update to the site, it now lists upcoming EA MMO title Star Wars: The Old Republic with a release date of September 9th in the UK. What does this mean?
MCV wrote about the topic today, describing the update on ShopTo that added this release date for the game. Back in January, MCV also wrote about the fact that EA executives were planning for a September release of the game. Disgruntled fans had a lot to say about this delayed release date that later seemed to be pushed ever farther into 2011.
After recent events and E3 news, most fans would be delighted to hear about a September release since a release any time before the end of the year was starting to look less promising. MCV writes:
“Despite missing its proposed Q2 2011 release date, as predicted by MCV, the game was recently removed from EA’s release schedule prompting fears that it may miss 2011 entirely.”

The official word from EA is that the game will indeed, arrive sometime in the calendar year of 2011. This would be smart news for EA with Mass Effect 3 coming out in early 2012. However, many are still skeptical that TOR will see a public release this year.


Could the posted price be an indication that things are still on track for September release or is it just a mixup by ShopTo on the original intended release date that likely won’t happen now?