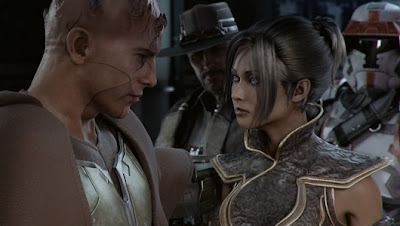 In a post on SWTOR.com yesterday, Stephen Reid confirms that there will be no release date and no preorder details at E3 2011. While I’m not really surprised, it’s still great to have the official word so we’re not sitting on the edge of our seats waiting.
Reid says,
“While I know many of you believed a release date announcement was going to happen – which is understandable – as I’ve said before, an announcement of that size will effectively be ‘pre-announced’, and we will not ‘bait and switch’ you. We aren’t going to lay a trail of subtle clues that lead to a release date announcement. We’ll be obvious. We’re just not there yet.”
Reid also had some words about the trailers and the release of “Return”.
“’Choose’ was always going to be shown at the E3 press conference. Unfortunately for us, we had a timing issue which put it live on Origin.com before the conference started.

”Return’ we saved for our fans worldwide, debuting it on The Old Republic website at the same time the press conference started. If you haven’t watched it yet, see it here. ”’Return’ is also the intro cinematic to The Old Republic – you’ll see it when you start the game.”

But just as Reid himself says, E3 is not over yet and there are still many things to be seen from BioWare.
According to Reid,
“This week we’ll be allowing the world’s media and fan sites to get hands-on with The Old Republic at the EA booth, and they’ll be reporting back on their experiences on Tatooine as well as seeing gameplay on Alderaan. Last but not least, they’ll get a glimpse at Operation: Eternity Vault, some of the high-end content in The Old Republic.”
Reports are already coming in from those lucky media outlets invited to the events of E3 and if you stay tuned right here on our site, you can bet that we will bring you every juicy tidbit as it is released.