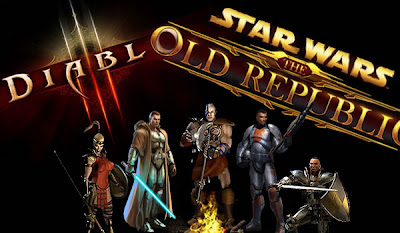 The guys over at DualShockers.com had a really interesting theory on the announcement of SWTOR coming after the Diablo III delay. The piece they wrote on the day after the SWTOR announcement describes a possible connection between the news about Diablo III and the release date announcement:
“Yesterday Blizzard announced the delay of Diablo III to early 2012, today Electronic Arts announced the release date for Star Wars: The Old Republic
I’m not usually the conspiracy theory type but it’s a pretty good point they make here with the linkage of the two announcements. Did EA/Bioware see this as their ideal time to jump on the announcement of the official release date?
Sounds like a good theory to me…
The article gives some pretty compelling ideas about why this theory might be true:
“Thirdly, by announcing a release date right after the disappointment caused by the Diablo III delay, EA stole Blizzard’s thunder in one stroke, getting many gamers that were anxiously awaiting for Diablo to look at Star Wars: The Old Republic as the perfect candidate to replace the rival in the holiday season.”
Again, all good points by Giuseppe Nelva. So what does Nelva decide to do after posting this masterpiece? Go straight to the horse’s mouth as the saying goes and ask SWTOR‘s Senior Community Manager Stephen Reid about the matter.
When asked how far from the truth the idea was he responded:
“About as far as it’s possible to get.”
And continued:
“Yep. The two had zero connection, but enjoy your conspiracy theory.:D”
ZING. Ouch…
He finally concluded:
“Call it a happy coincidence, because that’s really all it was.”
Haha! Good going, Giuseppe. We completely agree that even if it were true, he would never publicly admit it (or be authorized to do so) but kudos for bringing it to him and sharing the response with the rest of us. If you want to read the full article, plus the follow up with Reid’s response, head over to Dual Shockers and check it out for yourself.