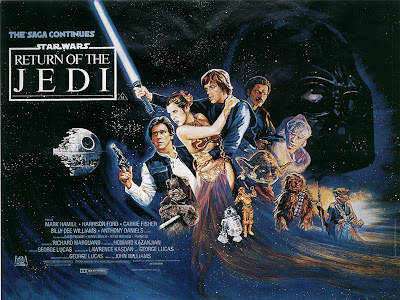 A blast from the past now, thanks to this clip from British TV news which details a shocking and frankly deplorable case of grand theft. One of the original copies of Return of the Jedi was snatched by cunning street urchin pirate types from a cinema in Hastings, despite ridiculously tight security measures. including having an old lady as the film’s security chief. Shocking.

And people say piracy wasn’t rife until people could mass circulate/share pirated goodies on the internet! All moral issues aside, this clip throws up one glorious question: just think, someone somewhere might well be sitting on an original, unedited version of the film. And it might just be the last one in existence.

Remember, kids, don’t be a Video Pirate, or you might have someone like Helen “Crazy Eyes” Ganz on your case. And no-one wants that.