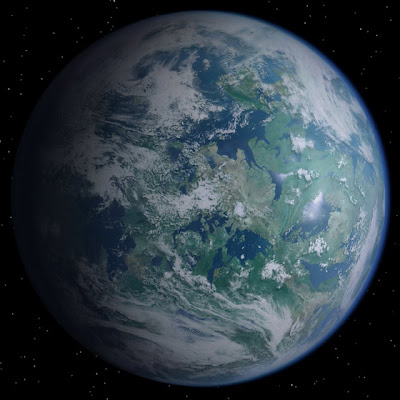 Alderaan was a Core Founder of the Galactic Republic in 25,053 BBY and one of the anchor-points for early hyperspace exploration. Alderaan was headquarters of Alderaan Royal Engineers, an early Republic shipwright. Alderaanian colonists settled Nim Drovis. During the Mandalorian Wars, the planet was threatened with invasion by the forces of Cassus Fett, but the entire invasion force was prematurely decimated, due to misuse of an ancient Sith artifact.

During the peak of the Great Galactic War, the planet’s peace and tranquility was shattered by a full-scale Sith Empire. The Sith quickly overwhelmed the local defense forces and took the entire royal family hostage. In response, a Republic and Jedi taskforce launched a swift counter-offensive against the Sith; recapturing the planet and inflicting a heavy defeat on the Sith.

As a consequence of the Sith invasion, the Alderaanian leadership adopted a hardline militarist stance towards the Sith Empire in the Galactic Senate. In 3,653 BBY, the Treaty of Coruscant ended the centuries-long conflict in favor of the Sith Empire—which had earlier launched a devastating attack on the galactic capital Coruscant. In protest, the Alderaanian crown prince walked out of the Senate and withdrew Alderaan from the Republic.

The crown prince’s actions created much division in Alderaan. While many supported his actions, others were outraged by this secession from the Republic. The crisis worsened with the assassination of the prince and the death of his consort a few days later. The Alderaanian Parliament was quickly torn apart by infighting between rival houses. A bloody civil war quickly ensued when one of these houses attempted a military coup.

In the subsequent Interstellar Cold War between the Republic and the Sith, the planet was the site of a number of border skirmishes and proxy battles between Republic and Sith forces. The Republic backed House Organa while the Sith backed a lesser royal house which sought to reclaim the throne. While neither side had military forces on Alderaan, the civil war on Alderaan helped sparked a return to full-scale conflict between the two superpowers.

At some point after the conflict, Alderaan presumably rejoined the Republic. In 27 BBY, it was personally protected by Jedi Master Eeth Koth during the Ashaar Khorda crisis.

Terrain
Considered the “Shining Star” of the Core Worlds, wild grasslands and old mountain ranges dominated the planet’s land surface. Large oceans and scattered inland seas provided the planet with ideal conditions for a large variety of flora and fauna to develop. As such, Alderaan was the homeworld of some of the galaxy’s most famous animals, such as the nerf and the thranta. Alderaanian cities were often built with great care taken to protect nature. One such city, Crevasse City was built on the walls of a canyon, nearly invisible from above. Others were built on stilts along the shoreline or under the polar ice. The capital, Aldera, known for its university, was built on a small island in the center of a caldera.

In the Castle Lands, the remains of Killik mounds stood as a silent testament to the indigenous species that had disappeared for unknown reasons. Philosophers, poets, and artists often visited the Castle Lands for inspiration and meditation. 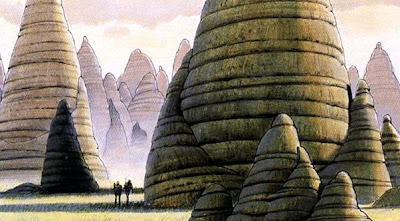 The Petrified mounds of the Killiks in the Castle Lands

Alderaan was home to more than eight thousand subspecies of grass and an even larger number of wildflowers. Its flora also included a massive variety of spices, herbs, and grains. The planet had no major oceans, but it had a single polar ice cap. The rest of Alderaan’s surface water was composed of thousands of lakes and connecting waterways.

Fauna
Alderaan had many rare species not seen anywhere else in the galaxy, as well as many common creatures. Among the more notable ones were the:

Society
Alderaanian culture valued education, the performing and fine arts, and peaceful resolutions to conflicts. They placed high value in their participation in the Galactic Senate—and later, its Imperial equivalent. The Alderaanians constantly sought a harmonious existence with their surroundings, evident in their integration of their society into the natural terrain of Alderaan. Alderaanians were known for love of philosophy.

An average Alderaanian was very educated and cultured. Poets and artists thrived on Alderaan. The beauty moved the pens of poets, while the vast grasslands served as a canvas for grass paintings. Alderaan was also famous for its cuisine. The large variety of spices and herbs allowed chefs to experiment and create some of the finest dishes in the galaxy. Steamed Alderaanian spiced wine was a favored beverage among many.

Government
Although a democratic society, Alderaan was headed by a hereditary constitutional monarchy, with the Royal House of Organa presiding over the High Court and legislative High Council of Alderaan. Its monarchs have variously borne the titles “Prince,” “First Chairman,” “Queen,” and “Viceroy.” Traditionally, the heir of the Alderaan throne also serves in the High Council of Alderaan and a term as Senator of Alderaan. A vizier helped the monarch rule.

Alderaan’s government deliberately halted itself from so much as questioning spacecraft leaving or arriving on the planet. 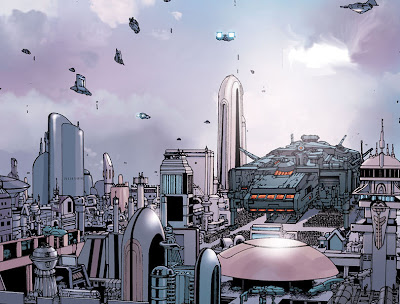 Alderaan, 3,653 BBY, at the signing of the Treaty of Coruscant