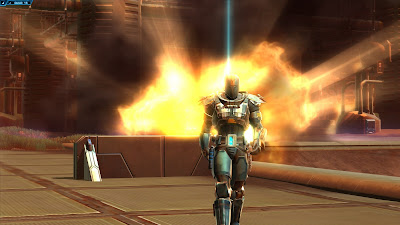 The thread, “Seriously!? (great wall of text from a 43 year old gamer)” is posted on the Official SWTOR forums and is well worth a read, despite the fact it’s roughly 1,000 words long. While it is a rant, the TLDR version will give you some insight to the game and it also makes you think for a minute before whining and complaining about SWTOR. Of course we get that it’s every gamer’s right to whine and complain when they don’t like something but then again, we have to be realistic about our expectations from the games we play these days.

While I’m nearly half his age [EDIT: LOL Lisa 😉 ], I’ve been playing video games, including MMORPGs nearly as long as I can remember and I agree with much of what he has to say.

“I shake my head (but understand) at 90% of the poster’s here that complain and say this game needs another year. Does anyone remember day 1 and the initial content offered of Ultima Online, Everquest, Anarchy Online, Asheron’s Call, Everquest II, Dark Age of Camelot, City of Heroes, Star Wars Galaxies (scratch that, I never played past beta), Warhammer Online, and yes… World of Warcraft? That’s my resume. I’ve spent the last 15 years (1/3rd of my life) playing MMO’s, and I was there on day 1 for all of the games I listed, and beta’d at least 4 of them.”

That’s one heck of an introduction. This gamer has some real experience under his belt, which I respect. Much unlike many of the WoW-heads who come along and want to compare every other MMO to the Blizzard success story, this gamer has a well-rounded basis for his opinions.

He goes on to cover bugs, complaints of PvE content being “too hard”, PvP and of course, the customizable UI (or lack thereof) that people keep complaining about.

He even addresses end game content (a source of much controversy):

“End game content? NONE OF THESE GAMES SHIPPED WITH ANY MORE END GAME CONTENT THAN SWTOR HAS…. NONE! You could argue that SWTOR actually has more in its initial offering (but really not much). Most of these games spent the 1st year on content enhancements because their initial content wasn’t working as intended, or needed to be expanded on to work as intended. EQ, DAoC, and WoW were the only games that added real end game content in the 1st year, and that took between 6 months and a year to appear.”

All great points that we’d do well to remember. Each of these aforementioned games was successful. Most are still here today and charging the gamers who play them. Some were more successful than others but they all made money and yet, critics question whether or not SWTOR will earn a profit.

He sums it up quite nicely for me with this line:

“No doubt Bioware has some work to do to fix what they have, and to add more to keep people playing. But to say it’s not ready for release, it needs more polish, it will never make money… it’s all cr@p!”

There will be bugs, there will be problems, the game will not feature every single thing you ever DREAMED of having in the ultimate, perfect MMORPG… but it definitely has the potential to go a long way.

Read his full post on the official SWTOR forums.