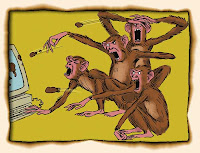 As we continue to count down the days to SWTOR launch, we will see different changes in the community. The beta testing period is over and the official forums will be getting a new facelift. This is reported to be more than just a makeover and in fact, a total overhaul that will wi pe all the current posts and private messages.Allison Berryman has announced the changes coming to the SWTOR official forums, including the data wipe.

The changes will also include a new community blog. She explains:

Another new feature we’re implementing is our Community blog, which will appear at the top of www.SWTOR.com/community. We’ll use this blog for important community announcements, updates, and to post articles of interest to our community members, so make sure to check it out frequently!

Sounds interesting for sure and we can’t wait to see it. But what about all the current data on the forums? Well, you can kiss it all goodbye after the 10th. If there is anything you want to save (including PMs), now is the time to save it before the forums get wiped permanently.

So what do you think about it all? Was the decision to wipe them rather than just archive a good one? Is it best to just get a fresh start before the game launches? What about all the people who have hundreds or even thousands of posts there? Are you one of the people who will lose a great number of posts when the forums get their facelift?