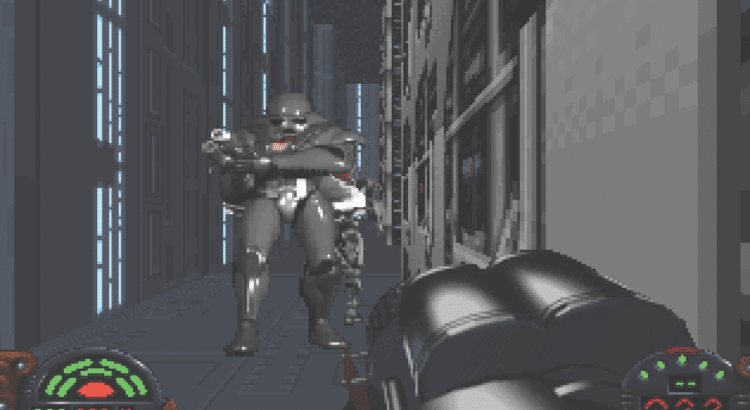 Disney has captured the attention and the hearts of people globally with The Mandalorian. If you’re one of the millions who have been following the show, you may have also noticed that they turned to Star Wars video games for their latest set of bad guys.

If you are not current on the show, you may want to go do that before you read any further. I really don’t want to ruin anything for you. If you’re up to date, then let’s continue.

In Chapter 14, the Evil Empire chief Moff Gideon sends Dark Troopers to planet Tython to kidnap “Baby Yoda”. These Dark Troopers are menacing dark droids with red eyes and they succeed in nabbing The Child. But some of you may find these droids to be familiar.

These Dark Troopers actually originated from the game Star Wars: Dark Forces. This was a 1996 first-person shooter game from Lucas Arts. I’ve written about it here on the site before, but it was a pretty good game.

We’ve also seen the Dark Troopers appear in other games such as Star Wars Galaxies and the Battlefront games.

But, the Dark Troopers are not the only video game reference. Can you name any others you’ve seen? It almost seems like each episode of The Mandalorian is a Star Wars game side quest.

This is something Star Wars gamer fans can definitely appreciate.