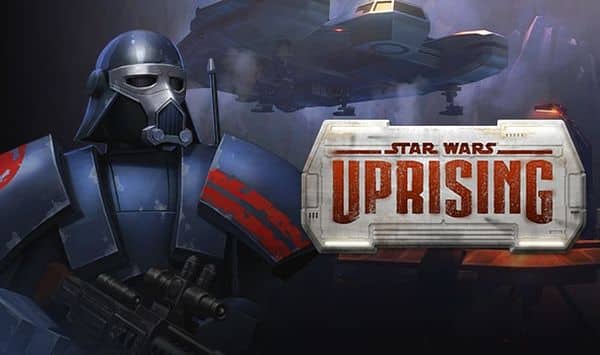 There is a great post in the Uprising Subreddit that gives you all the info you need to know about gear types and stats. It has since been added to the game guides section so you can find it along with other great tools to help you in Star Wars: Uprising.

Here is an overview:

All the gear in the game has 3 primary stats, and 0 to 3 secondary stats. All of those stats can belong to one of 3 main categories: Offensive, Defensive and Utility. Please note that only Offensive and Defensive stats matter for PR, while Utility has more intangible advantages.

At the moment precise correlation between the stats in the PR formula is unknown; it is clear that there’s no simple arithmetic addition or even multiplication, there’s more behind the curtain, but at least it’s clear that the addition of more stat usually gives more PR than comparison tooltips suggest and dependant on your other gear or stats (+Melee Damage gives much more PR if you’re wielding a melee weapon than when you have a rifle).

Two of the primary stats – Base Damage and Base Health – are simply a function of your character level and cannot be improved by gear, only by temporary effects (buffs & debuffs).

All the gear in the game has all 3 of them, but in different proportion. For a given level, all the items have the same total primary stats, but spread out between the 3 types differently. For example, maxed out 4★ Items all have a total of 2000 in primary stats, but the distribution between stats depends on the type: an Assault Blade will have 1180/340/480, while an Assault Rifle will have 1480/190/330. Please note that in some cases the total may be off by +-1 stat, probably due to the way the game treats roundings (so you can see 3659 or 3661 total stats). You can see the total of Primary Stats on maxed-out gear per star level in this table:

See the full post for yourself for all the stats and charts. You may want to bookmark this one as it will be a very useful guide and hopefully will continue to be updated. As always, if you know of any great guides like this for Star Wars games that we have not posted about yet, let us know.

I pledge myself to your teachings

This lady is easily one of my favorites

James Gunn on Knights of the Old Republic game

Don’t let him kill me!

Now this is pod racing