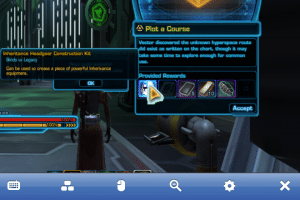 Are you looking to build and collect your Legacy Gear? Do you want to give some items to an alt to get leveled up with good gear? There are several ways to do this and crafting missions are a good start. Some players have found that running 340 Investigation missions give pieces of Inheritance Construction Kits. But that’s not all… it’s pretty safe to say that all 340 companion missions from all skills have a chance to drop Legacy tokens.

You can also kits as drops from mobs which are considered rare drops but I’ve gotten one already myself. It does seem they are trying to give us several ways to get this gear and Inheritance Construction Kits.

One beef some players have with the whole thing is whether or not the Legacy Gear is worth it, though. There is a convo happening about it over on MMO-Champion as well as multiple threads on the official forums and in other communities about how players are impressed with the Legacy Gear and Inheritance kits.

The overall consensus is that they are just not that useful and the majority of players want them to have the ability to level with your character. Others feel these are more of a novelty item at best, and not worth the time invested to get and craft the item for your alts. While BioWare had the right idea with wanting to help those with a higher level character get gear for their alts, did they drop the ball on the execution of this program within the game?

What do you think about the Inheritance Legacy Gear?