As with most games, reaching max level (lvl 50) is only the beginning.  Once there, players can begin the journey to gain the best gear this game has to offer to take on new challenges and harder operations.  This guide is meant to provide an explanation to how this is accomplished and hopeful clear up some of the confusion.

Trading Up to Tionese
Shortly after reaching level 50 a character receives a new mail which begins a short quest.  This quest takes them to their local Tionese Vendor where they are supplied 99 commendations and another quest for them to undertake any hard mode flash point.  This quest is mainly designed to introduce new players to the Looking For Group Finder (referred often as lfg) and provide them with starting gear.  Upon completion they’ll receive the final commendation and be able to complete their first set.

A Sith Marauder in Tionese Gear.

While Tionese is definitely the lowest of tier gear in the game it is still endgame gear and more than likely considerably better than the leveling greens and blues a player currently has equipped.  For this reason, it is very very desirable to start here. Tionese has an effective gear level of 54 in this game.

Collecting Columi
Once a character is fully equipped in tionese gear it’s time to start looking at the next level of gear: Columi.  Columi is available for purchase at the same set of vendors as Tionese and you will find one set for each class.  Columi gear can be purchased by either by trading in a certain amount of Columi Commendations or a specific columi token.

Columi commendations are earned a number of different ways.  First, there are a few quests which reward them to players for their completion.  Most of these can be found on the mission terminal in the supply section of the fleet.  Secondly, hard mode flash point bosses can drop these commendations.  Lastly, Tier One Operation bosses (Eternity Vault and Kagara’s Palace) will drop them.  The one exception is the main hand weapon for each class which must be purchased using a token. 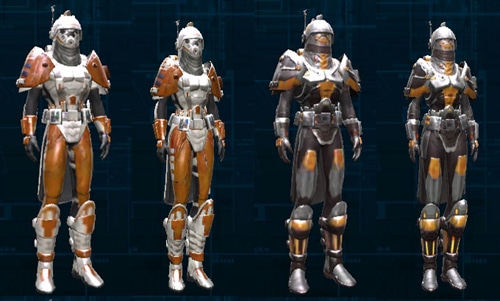 The other method is to earn a Columi Token.  Tokens drop off Tier One Operation bosses as well as the final boss in each hard mode flashpoint.  Columi tokens are very specific to both slot and class when they drop.  For example, a token may drop for the Trooper’s Gloves and then another for the Knight’s Headpiece.  Which slot is dropped is always specific to the boss, but the class will vary based on the makeup of the group so you will always have a chance of your class specific token (winning the loot roll is another story).

An important note on columi is that each armoring is tied to a specific slot and each set bonus tied to the shell.  This means that you cannot take the armoring from the chest and place it in a head piece, but does mean that you could place a different armoring in that chest and still gain the set bonus.  The exception to this rule is the off hand token item which is not slot specific.

Generally the best way to gain this level of gear is to do your Tier One Hard Mode Flashpoints in conjunction with quests and / or Tier One Operations.  Hopefully you’ll gain several tokens to trade in as well as commendations to purchase the missing pieces.  Columi armoring is rated at level 56.

End of Part 1 (second part will be available soon!)