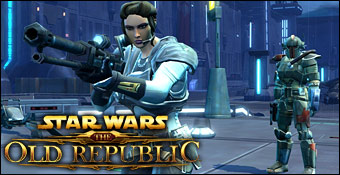 Apparently the frensh gaming website jeuxvideo also took a trip to London to cover the show. Hopefully there will be even more media outlets reportingfrom the show the comming days.

The entire article on jeuxvideo is in French so you have to turn on the google translator if you don’t read this language. I wtill recoment you to check it out, as it gives lot’s of new info on the Jedi classes:

The impression of power generated by his avataris in fact what immediately jumps to the face. Graphically, the game is doing quite well indeed. The lighting effects and animations accompanying the blows of the Jedi give thanks to their power. Special mention to one of Knight’s attack which allows him to make a leap of fifteen feet with air to spin the key to plant his sword into the body of his enemy. Exhilarating! Environments were also treated and packed with small details.

As for modeling a little smooth characters, cartoon way, it will generate debate, sure, but it remains unconvincing. In fact, the only issues relate to a framerate a bit unstable, a few bugs collision and textures not always very clear but nothing too alarming since the version in our hands was far from final. The sound aspect is also crucial. The epic music accentuate the intensity of the action perfectly and highlight the character of Homeric scenes. As for the sounds they make more credible the universe created by BioWare.

You can find the rest of the article on French here But if you put on the google translater it’s actually quite readable.