pcgamer has released a few new screenhots of crafting in SWTOR. The screenshots comes with an article about the new crafting informatin we discussed a few days ago. Here is a snip:

BioWare’s Blaine Christine was more cagey on TOR’s crafting skills, but unveiled two subsets of the overarching ability: ‘artifice’, presumably used to make weapons and armour, and ‘biochem’ that provides medical and stim-packs. The image of a Sith Warrior beavering away at a workbench packing band-aids into a first-aid kit clearly doesn’t work within Star Wars’ fiction – instead, you can stand at the back and bellow “WORK HARDER” at your friends and minions as they do your nit-picky work for you. Or just leave them to it and get on with other missions. The Old Republic only lets you take one computer friend down with you on missions, and when you’ve packed a buddy off to complete a job for you, they’re unavailable for the duration.

‘Missions’ are the final skill tree branch, and encompass ‘diplomacy’ and ‘treasure hunting’ specialisations as well as a few others. Choosing an inveterate trinket-seeker to nip down to a planet and go hunting for prizes gives you a good chance of them coming back with a spangly new item in hand.

The intention is to increase interaction with your team members, rather than just rolling with your favourite every time. With the crew skills system, BioWare hopes to foster the kind of personalised communal living arrangement that made the Mass Effect games feel so personable in the cold vacuum of space. 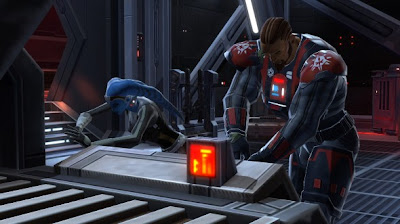 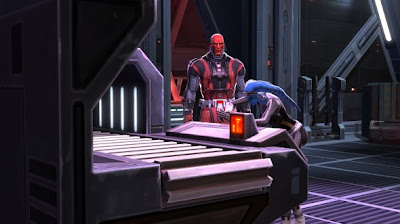