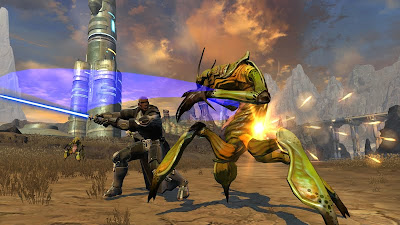 Confirming what you may have already heard on the Star Wars: The Old Republic’s Jedi Knight, BioWare has finally updated the holonet to include specialization and companion information for this deeply iconic class.

The Jedi will be able to choose between the heavily armored tank-like specialization aptly name the Guardian or the more limber and offensive specialization of the Sentinel.

To assist you on your journey through the brutal worlds in the Star Wars universe, you can choose a T7-01 droid to accompany you. With centuries since its last memory wipe, this droid would be a valuable asset of knowledge!

You can learn more about the Jedi Knight, their specializations and known associates by checking out the freshly updated holonet on the official SWTOR website.

A symbol of hope in dark times, the Jedi Knight stands for the legacy of the Jedi Order—more than twenty-thousand years of protecting the Republic and keeping the peace across the galaxy. Though Jedi Knights have served as generals, guerilla fighters, and warriors for generations, their legendary combat prowess faces its greatest test during this age.

Through years of disciplined training and meditation, the Jedi Knight hones body and mind into perfect harmony. Combining the foresight of the Force with unrivaled reflexes and practiced physical precision, the Knight turns combat into an art form, gracefully executing acrobatic feats in tandem with elegant lightsaber tactics.

This video captures the experience of the Jedi Knight in Star Wars™: The Old Republic™.

Also this week, Blood of the Empire #9, a Star Wars web comic, is now available!

Teneb Kel awakens from his vision with a new understanding of the danger he faces–but is there still time to stop Exal Kressh’s plot against the Emperor from coming to fruition? And meanwhile, what’s going on with Maggot and the Jedi Padawan…?

Catch up on previous issues and get the latest Blood of the Empire here.