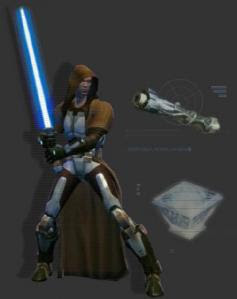 Yup, well, it’s out of the bag now, officially at least. Jedi Knights are in TOR, and they’re pretty much what you expected. More finesse than the Sith Warrior, and more wimpy for it. As you can tell, this news doesn’t get my heart pumping any faster — I’m just not that excited about Force-users in Star Wars. I feel they’re overplayed, over-worshiped, and over-emphasized in any product in which they appear. Plus, I’m envisioning the headache I’m going to get playing in a crowd of 90% lightsaber wielders, who are all jumping around and waving their big rave sticks like Jedi whack-a-moles.

I find it not just a bit hilarious that BioWare is referencing Samuel L. Jackson’s Mace Windu as the primary inspiration for this iconic role. Not Obi Wan, Qui-Gon Jinn, Luke or Yoda, hm? Nope, you had to go with the guy who sat on his butt more than he ever fought? I wonder if that’ll be a skill: “Jedi Meditation – Sit still and meditate in the Force, completely oblivious to the fact that the Emperor and the Sith are going to topple the republic right out from under your nose.” What I think is going on here is that they want to throw a bone to the prequel fans, since thus far all of the iconic roles have referenced the original trilogy characters.

I just want to see them try to justify Padme as an iconic character, since a list of her top 40 accomplishments include losing control of her entire planet without much of a fight, elevating the evil Emperor to rule, exposing her midriff, tolerating Darth Vader’s hammy romantic come-ons, getting pregnant, and then dying because she’s really, like, sad or something. That’s hotkeys 1-6 right there.