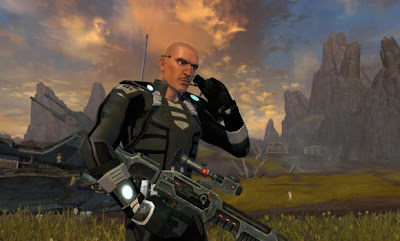 We’ve got Trooper, Smuggler, Jedi Knight, Bounty Hunter, Sith Warrior, and now Imperial Agent. BioWare revealed the sixth class for Star Wars: The Old Republic today on their forums. This news comes as absolutely no surprise to those who attended the EA Press Tour earlier this week — they enjoyed advance information from producer Blaine Christine.

Imperial Agents are a rogue class of sorts, doing their work for the Empire with high-tech tools to help them infiltrate the republic and assassinate enemies of the Sith Empire. The announcement from Sean Dahlberg says that Imperial Agents are “heavily inspired by several classic Star Wars characters such as Zam Wessel and Grand Moff Tarkin. […] Players who choose to be Imperial Agents in The Old Republic (TOR) will see the underbelly of the Empire in a whole new light.“

The Holonet will be updated next week with the Imperial Agent, but the class already has its own forum on the official site and discussion is going strong.