As if we hadn’t all had enough of the Rakghouls leveling up, a new secret event is here with game update 1.2- The Rakghoul plague, which BioWare invented for the original Knights of the Old Republic is somewhat like a zombie apocalypse in a Star Wars world. Becoming infected can happen with a simple scratch and it will turn you into a hungry, hulking monster of a being. Trust me, you don’t want to be a Rakghoul.

The Rakghoul plague has been a part of the SWTOR for some time now but this world event (the first of many to come) puts a new twist on it.

There is a event going on right now, with UGTAH – (Infected by Rakghoul virus) level 50 world boss wandering the Outlaws Den. Just north of the Republic outpost in the Dune Sea on Tatooine you will find a crashed ship that is surrounded by Rakghouls. This is where the first in a chain of new dailies is found. If you’re around level 25+, you should be able to begin the quest chains. Basically, if you’re of level to be on Tatooine in the first place, these should come naturally to you to start.

One of the most fun parts of this world event is that players can be infected with the Rakghoul virus and if not treated, it will cause you to explode, spreading the plague to anyone in the area. Leave it to some players to figure out how to transmit the virus in warzones and even while standing around the Fleet. On the humorous side, this does add some roleplaying aspect to it since were this real, you probably would become infected that way.

You can make yourself immune for a short period of time with a vaccine sold by all medical droids. There are also quarantine droids in all major starports to prevent the spread of the plague to safe areas.

The event will allow you to earn new Rakghoul DNA items, that are used for exclusive lightsaber crystals, companion customizations, and a mini-Rakghoul pet.

Here’s some screenshots (courtesy of Physo) and info on completing the quests and achievements for this new world event: 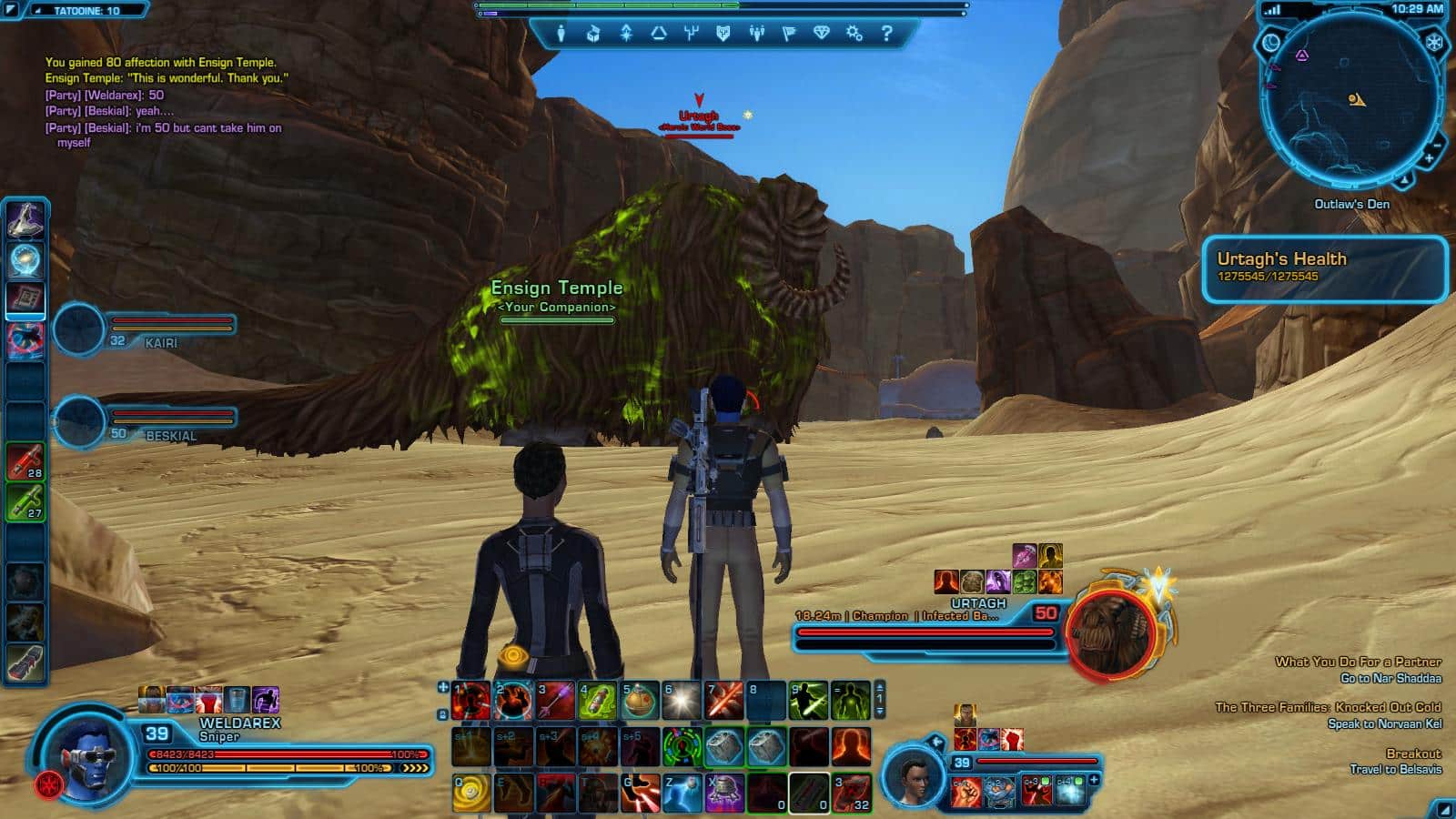 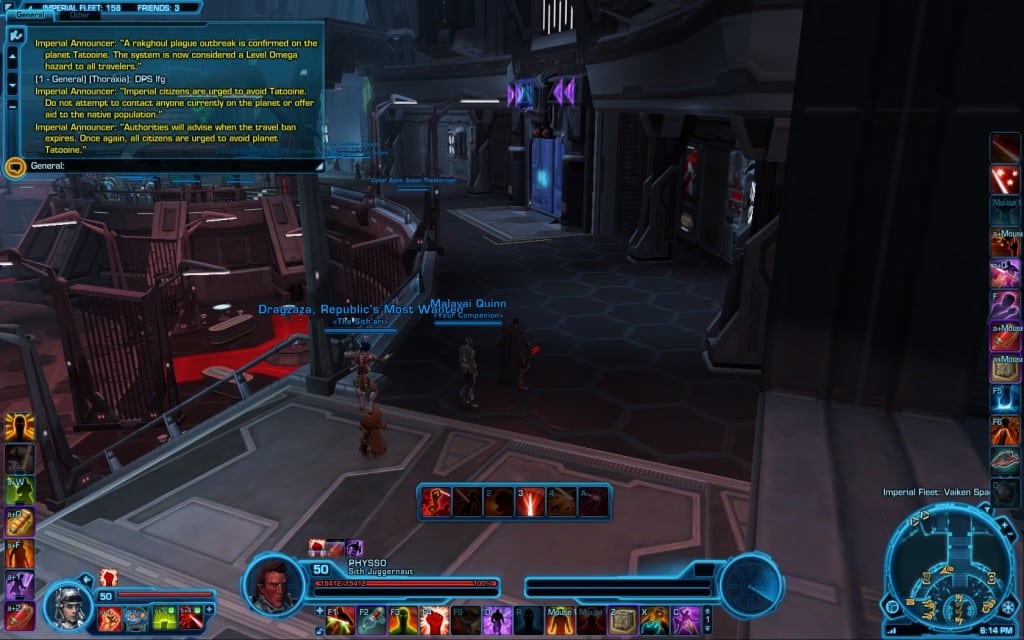 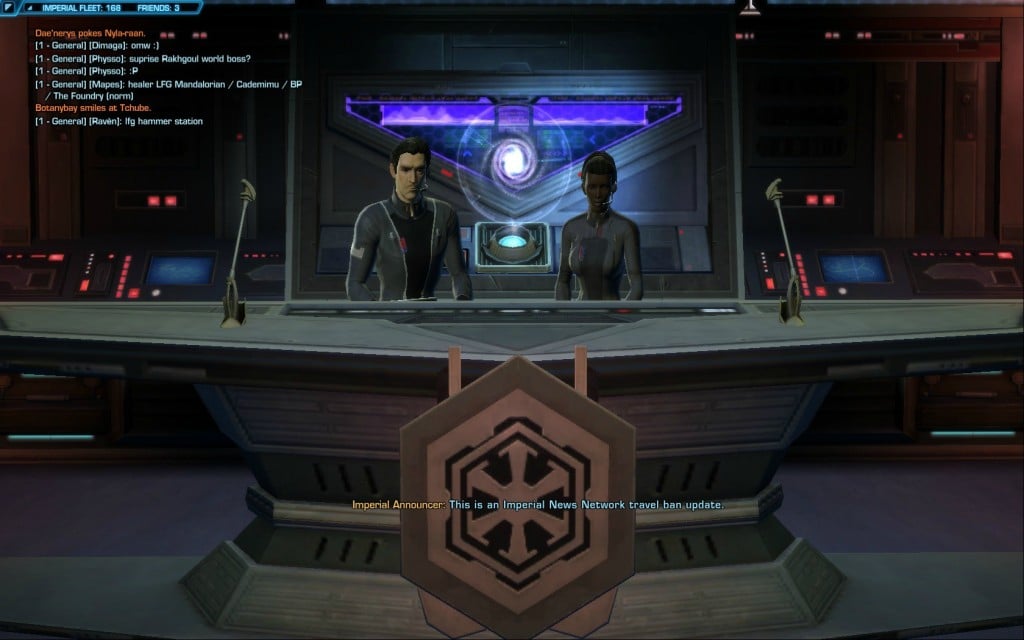 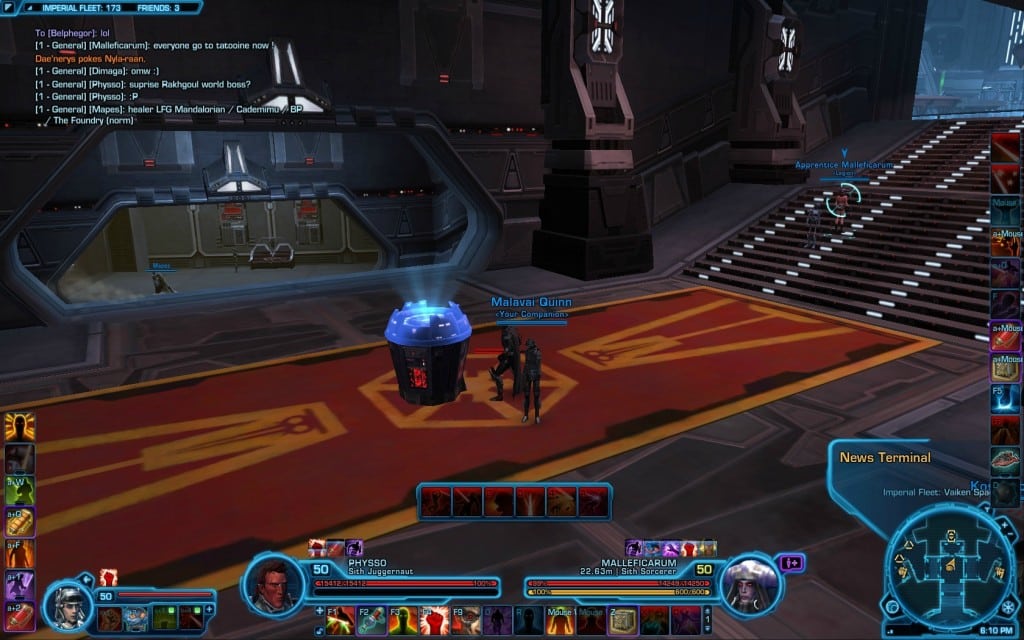 There are infected 3 Bosses that Each give a Codex Entry;

Trapjaw At his usual Position. (still level 30, a walkover for any 50)

Urtagh Inside Outlaws Den. (in the PvP area, anyone that’s NOT in your group can attack you, even same faction. boss does AoE damage within 20 meters from time to time, but unfriendly players are the biggest threat, bring lots of friends, 2 hour respawn timer.)

Zam Brak, near the sarlaccc pit.

There are 2 new AREA quests Each giving a Codex Entry;

The other is located in the Jundland, South of Outpost Largona and east of Ridgeside Sentry Post. (loc. 2000, -600). These are Daily Repeatable.

These 2 area quests give ‘Rakghoul DNA Sample’ (not bound) that can be traded in at a vendor located at (-889, -1920), for a Rakling pet, crystal’s with Black-Green colour and a ‘Infected Companion Lockbox’.

There is a last quest.

You have to be infected, and have the infection run its full duration (20-30 mins), when its completely done you will explode! if you exposion hit other players, it will start a quest to infect 10 more people this way. Infecting other players will also give ‘Rakghoul DNA Sample”.

More on spreading the infection here.

There is a title for this event, killing the 3 bosses should give this title, but its buggy. Only 1 person in the group will get it when it bugs.