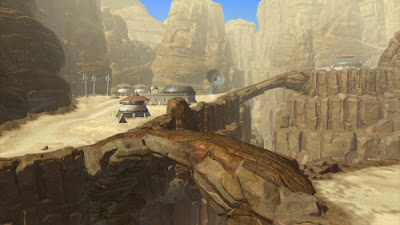 You will find open world PvP with plenty of scum, villainy and excitement to spare at Outlaw’s Den in SWTOR- or at least that’s the idea. There will be a special spot in Tatooine for those who love to take PvP to the next level, those who want a little more risk in that casual trip to the vendor and those who just need something to do to break the monotony of leveling.

At the recent fan site summit in Austin, TX, Star Wars: The Old Republic’s Lead PvP Designer Gabe Amatangelo revealed Outlaw’s Den, a place designed to give you all the good stuff you could ever imagine from a PvP free-for-all zone.

What kind of goodies await you in Outlaw’s Den? Well, you can kill members of your own faction so there is that… and you can fight for rewards, fight for the vendors or just fight to be fighting. It is the Outlaw’s Den, after all.

BioWare has designed a few things to make it more intriguing to visit this area of the map. There are vendors that sell rare mounts and social gear, top-tier crafting materials, a pit reserved for duels to the death and even an auction kiosk.

You can also kill NPCs which is either going to be interesting or absolutely obnoxious. It sounds like they won’t be easy to kill and it might take a whole group to down one but it’s possible that certain guilds might want to camp and kill certain vendors so that other gamers cannot have access. It could set the stage for griefing but then again, it’s the Outlaw’s Den so that sort of thing might even be expected and encouraged.

Nobody can capture the zone so fighting goes on and on with no end. It should be a pretty interesting place to pay a visit!