To explain some of the choices in BioWare’s approach to the advanced classes system in The Old Republic, this Friday’s update gives us a BioWare blog post from Principal Lead Systems Designer, Georg Zoeller. Here’s an except:

Han Solo, Lando, Talon Karrde… There are plenty of different Smuggler personalities to be found in the Star Wars universe to choose from and this is reflected in the versatility of their available Advanced Classes: 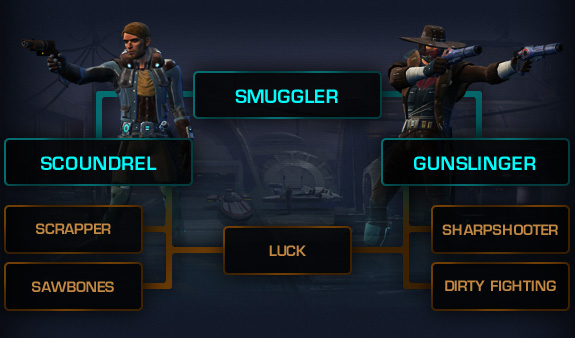 The Scoundrel is not afraid of getting his hands dirty, as the ‘Scrapper’ skill-set has an off-hand Scatter Gun, a number of powerful (but not necessarily fair) melee moves and access to a Stealth Field Generator with various possible upgrades for a dramatic entrance … or exit.

The ‘Sawbones’ skill-set on the other hand offers ways to dramatically improve the Smuggler’s healing and support-related abilities, including access to the powerful Emergency Medpack.

And, if all else fails, the Scoundrel seems to have the uncanny ability to Shoot First, a very useful skill to have for sure.

Points of note in the article include that you choose an advanced class when you get to the Advanced Class trainer on your faction’s capitol world (which I’m assuming is right after you leave the ‘tutorial’ world such as Tython) and that this choice is mandatory (you have to pick an advanced class).
It was also noted, again, that all names related to classes that you see on the site are subject to change. Hopefully that’s a hint towards a possible name change for the Wizard.

Anyway, read the entire blog post at the official site.