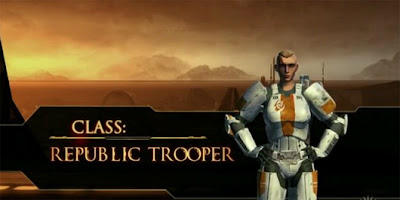 “So how was the weekend beta?” My friend Vash was always had questions about The Old Republic though he had no intention of playing.
“Crowded. A lot of trash talking. An average day in any other game really.”
“So what class did you play for your blog?”
“The class you wanted to play after seeing the “Hope” trailer. Trooper.”

Welcome back to another installment of Intergalactic Intel. This week we’re talking about the trooper. A powerful ranged class for the Galactic Republic. Two reminders before we begin I’m looking for a co-host for my new Old Republic podcast, and these reviews are only levels 1-16 so classes may change drastically to level 50.

You are sent on a ton of menial quests starting protecting transports, to eventually escorting VIPS, in attempts to bring the separatists down. During a mission you, as a “new guy” are left behind on, something terrible happens to Havoc Squad. And you are left with the task of reconstructing a new Havoc Squad to serve the Galactic Republic.

Combat:
The trooper is a purely ranged character, who uses the latest in Galactic Republic military equipment. The trooper doesn’t stick to just one type of gun. Their abilities range from explosive rounds, cryo grenades to freeze their opponents, and deadly motor strikes. In addition to different types of guns aren’t the only thing the trooper has. Troopers have access to various types of ammo that suit their combat needs.

Troopers use a resource known as ammo. Troopers start with a messily 12 ammo, which comes back to slowly. Careless spamming of abilities will cost you to expend your ammo quickly at the beginning of combat. When allowed to do what they want, Troopers become some of the most dangerous members of the Old Republic cast thus far.

I decided to try out “Ranged tanking” with the trooper and ended up going Vanguard. The vanguard doesn’t really have anything too different than the other tanking classes, but with that being said Vanguards are probably one of my favorites simply because of their potential to kite. With an ally slowing targets you can keep aggro on them easily without being damage too much while moving. The vanguard was also incredibly durable with their cool downs and heavy armor.

The commando is what I really wanted to play. A ranged class who uses large heavy mini-gun type weapon. Their healing abilities to me seemed to be one of the more interesting styles of healing. The first ability I loved was a miniature aoe known as the “kolto bomb” almost like a friendly healing grenade. The other ability was a small single target, no resource heal similar to the Medic’s medi gun in Team Fortress 2, minus the ubber charge.

Companion:
I was upset that the trooper doesn’t gain access to their companion until they’ve left their starting world. Your first companion is Lieutenant Aric Jorgan. Jorgan, like you is a trooper, who resembles a Commando without the healing. A powerful ranged DPS who right beside me was equally if not more dangerous than I was.

Jorgan as a character is a plain old stick in the mud. If it’s not for the republic, than he doesn’t care. If it’s our duty to do something we’d better do it. He has some resentment towards you, but you’ll soon get past that.

So overall the Trooper is shaping up to be a very cool class all in all. With this being said we have technically covered every class in the game. I will be going over to each classes faction counter part and doing the opposite Advanced class in the next coming weeks. Next week will be a double feature with The Smuggler and Sith Inquisitor. Until then may the force be with you!