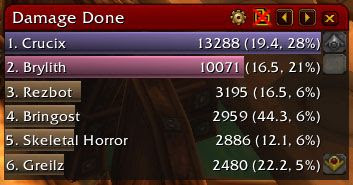 Like to analyze your game stats? Want to keep track of how much damage you do? Trying to get your guild “raid-ready”? If you agree that SWTOR has been lacking in the stats area, then you will be happy to hear the news that Massively reports on upcoming changes and additions to SWTOR.

Players on the Star Wars: The Old Republic official forums have dug up a Fansite Summit Q&A session with the game’s lead combat designer Georg Zoeller in which he suggested that some new features will be coming to the game post-launch for those who want to ensure they’re getting the most out of their character builds. During the talk, Zoeller claimed that combat log parsing and other such performance analysis features were “very high on [BioWare’s] priority list.”

This sounds really promising, especially to the type of MMO gamer who wants those stats and logs. I’m a numbers girl myself so I think it will be fun to have damage meters and other stats parsing but there are some guys in my guild who will really go all out over these additions to the game. We played WoW together and they were all about the numbers, equations and stats. They are going nuts for this in SWTOR, too.

While I don’t personally consider them a necessity, I do think there are a lot of benefits to having these features in the game so I’ll be happy to see them added. What do you think? Do you want to see more features like this from SWTOR or at very least, the ability to use addons and mods to gain these same features?