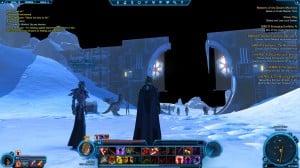 As always BioWare used today’s server maintenance to patch up. This time with the largest patch since 1.2. If you me, the most important issue corrected, is the issue that prevented players from adding offline players to their friends list. This makes it much easier to mail stuff to your alts.  Unfortunately still doesn’t seem to work for our own cross faction alts.