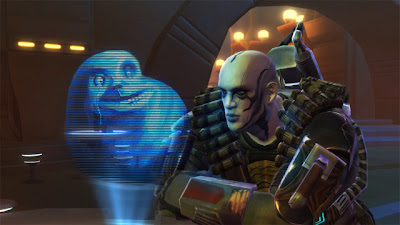 Are you the type of gamer who loves RPGs but typically skips the multiplayer aspects of MMOs? You might still like SWTOR. While I enjoy my fair share of multiplayer games, I also have a tendency to go solo quite often. I spent a good year or more of my 7-year history in World of Warcraft playing solo. I just got tired of everything else there was to do in the game and focused on speed-leveling characters, getting achievements, making money on the Auction House or whatever other random activities gave me enjoyment at the time. I leveled some characters outside of a guild and I didn’t talk to anyone- just ran through doing my own thing.

I have discovered in my years as a gamer that other people like playing this way sometimes, too. One gamer wrote about it on Arstechnica.com in “Forever alone? Star Wars: The Old Republic as a single-player game”. Ben Kuchera admits that he has little experience in online role playing games but has some pretty interesting things to say about SWTOR.

He starts by telling us why he was interested in the game:

“This approach isn’t as crazy an idea as it sounds; Bioware has told me in the past that The Old Republic contains multiple sequels to its well-loved RPG Knights of the Old Republic, since each class contains its own story and characters. Those are what I wanted to get at—the story, the voice acting, and the fun of a Bioware RPG—rather than the work of joining a guild, gaining arcane knowledge about MMORPGs, and dealing with other people.”

And then goes on to explain what he did and did not like about the game and why SWTOR is a viable “single player MMO”. The article is a great, fun read and I tend to agree on many levels. There will be some mental adjustments for the non-online-gamer to make but SWTOR has a lot to offer even those who don’t usually want to play online or multiplayer games.

Could this be one more thing that BioWare has going for them with SWTOR?