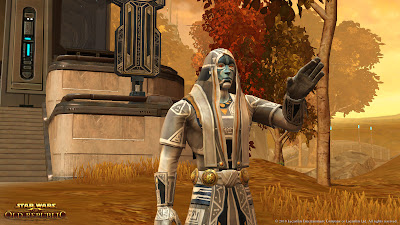 BioWare returns this week with a double dose of Star Wars: The Old Republic (SWTOR) news. After the revealing of Advanced Classes this week, BioWare added additional details to the SWTOR website that explain the feature in more detail. Each class will be able to choose from one of two Advanced Classes. After investing in their chosen path, a third shared skill set will become available to help enhance a character’s chosen skills and role.

The second bit of news involves the development and building of worlds in SWTOR. If you’ve ever wondered how building the concept and lore behind a world and its population works in MMORPGs this is a good read that will interest you. The team explains many of the challenges faced when building a world for players to become immersed in and the process by which the content is developed and eventually brought to life.

Two problems quickly made themselves apparent. First and foremost, a BioWare story doesn’t work if you don’t understand the shoes you’re standing in. Roleplaying games are about exploration and discovery but you have to have a basic place to work from. Something as alien as the Mystic culture (its express purpose is to be strange to the Star Wars galaxy) is the exact opposite of where we’d want to start a Player. “Never introduce the exception before you teach the rule” is one of the fundamental tenants of strong RPG writing and obviously the rule was the Jedi, the Republic, the Sith, the Empire.

Interestingly, the Mystics have been around as long at the Old Republic has–though the culture and people who would become the Voss came much later. In the first days we wanted to bring something completely new to our class offerings and a group who looked at the Force in a fundamentally different way was intriguing. The Mystics would be grey and dangerous to the eyes of the Jedi, able to see through the lies of the Sith and beholden and interested in neither. They would enable us to explore themes of religion (every culture sees gods but interprets them differently), culture (believing themselves to be the chosen people) and politics (due to the infallibility of their visions, they are happily totalitarian). We had numerous different ideas for how they would look, be thought of by the greater galaxy and behave. For a while we had a running joke of Mystic converts standing in spaceports asking weary travelers, “Have you been to Voss?”

Finally there’s another bit of information come out of the UK press event, namely a video interview with Daniel Erickson. It’s been posted on various news sites, but here’s the video on YouTube: