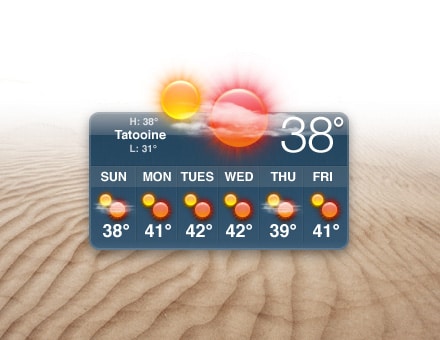 SWToRStrategies: Wall of Crazy (WoC) is the latest column that aspires to look into certain concepts and ideas that could make into our favorite game. The term “Wall of Crazy” is something that Bioware used in the past to describe crazy ideas that developers have during meetings and could eventually materialize if given the right resources. The most recent example, is the implementation of the Guild Capital ships and Guild Battles.

These two features were something that were promised very early in SWToR’s lifespan and took quite sometime before they became reality. I suspect Bioware that decided to limit news releases relating to their WoC since in many cases impatient fans want concepts like these to be implemented within weeks not years (like it happened with capital ships).

The first WoC idea we’re going to look into is weather and day/night cycle effects.

1. Description: Many other MMOs have used to weather to either impact how the game is played as well as provide additional immersion to the game. Rain, snow, fog and others could offer a more dynamic environment to SWToR. Since the game is taking place on “a galaxy far far away” developers can be free to experiment with other more creative ways to make planetary weather more interesting and less Earth-like.

Likewise, a day/night cycle could offer an additional layer of dynamic realism to the game. For example, imagine a night Cycle in Tatooine where certain events took place only when it’s night. In the past, Bioware has pointed out we don’t see day/night cycles because Star Wars universe planets have significant longer day/night life cycles as compared to Earth. At the same time though, one could argue that time is not a major consideration in SWToR. I can pick up a “very urgent” mission from a non-playable character (NPC), log-off and come back in a week and complete it without any sort of repercussion. Weather as well-as day/night effects could fall under the same concept

2. Background information: According to rumors, Bioware used a heavily modified version of the Hero Engine to build SWToR. The development engine evolved from an unreleased MMO called Hero’s Journey. While the before-mentioned game never got to our hands,  it evolved to an engine that Bioware is currently using for SWToR and Zenimax used for development purposes in Elder Scrolls Online. If you head over to the Hero’s Engine website  and read through its features, you will discover that one of them deals with dynamic and light environmental schemes. In addition, HeroEngine wiki makes reference to implementing weather systems using this development package.

3. Day/Night cycles and weather effects would happen because:

4. Day/Night cycles and weather effects would NOT happen because:

5. Probability of day/night and weather cycles making it into SWToR : Medium/Low. Our take is that weather and day/night cycles are not in Bioware’s top priorities at the moment, simply because there isn’t enough demand for them. At the same time though, the release of newer MMOs (Everquest Next and WoW’s latest expansion) that promote dynamic and sandbox-like environments as their main advantage might just force the company’s hand. From a technical point of view, they certainly have the tools to incorporate this feature. If the Austin-based developer wants SWToR remain a unique and fresh Star Wars gaming experience, then getting off the beaten path is definitely the only option.