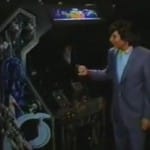 There have been many Star Wars games before SWTOR- seriously, there have been TONS. But there is one Star Wars game that comes to mind first for those old enough to remember, the 1983 Atari game Star Wars. This was the first time a Star Wars game had been created. I was only a year old when it released and I would not see the game or an Atari for quite some time but I did have the privilege of playing it once at a friend’s, more than a decade after its release.

Kotaku reminds us of the game on Star Wars Day:

The game made its debut during “The Video Game Challenge,” a short-lived television program from the 80’s.

Just like the force, this Star Wars game will be with you… always.

Actually, considering how regularly I still think about that game…that’s true!

Does anyone reading remember that show or even that specific episode? I can’t imagine how cool that would have been to a Star Wars fan who had just seen the films and now got to play it in a video game. Check out the Kotaku link for a video from the TV debut.