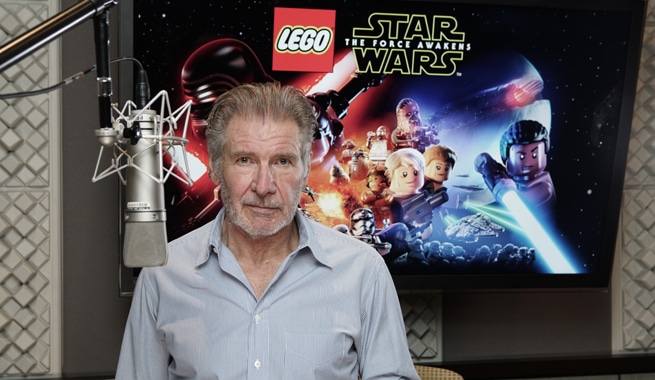 At 73 years old, Harrison Ford is now a video game star. According to People magazine, the 73-year old actor recorded original dialogue featured in the game, which allows fans to play out the storylines from the famous film. If you’re a fan of Han Solo and The Force Awakens, you’re going to love this. Many of us who are video game fans know how it can be disappointing when a movie-based video game cannot get the same voice actor to play an iconic part. With a role like Han Solo, anyone other than Ford just wouldn’t cut it.

Here’s a trailer from the Daily Mail if you want to see for yourself:

Harrison Ford makes his appearance in the new popular LEGO game with his longtime pal and sidekick, Chewbacca. If you have not played the game yet, it closely follows the story from the film The Force Awakens so major spoilers if you haven’t seen it yet (but seriously, who hasn’t seen it yet?!) and it adds the typical LEGO series fun to it. There’s witty dialogue and of course, those adorable little LEGO figures make it all great fun.

While this video game is a first for the aging actor, he’s not the only actor from the film to make an appearance in the game. We also see (LEGO versions of) John Boyega (Finn), Adam Driver (Kylo Ren), Daisy Ridley (Rey) and Oscar Isaac (Poe Dameron).

The game is available for PlayStation 4, PlayStation 3, PlayStation Vita, Xbox One, Xbox 360, Wii U, Nintendo 3DS and Steam (Windows PC) so if you have not tried it yet, get yourself off Pokemon Go and get it today.