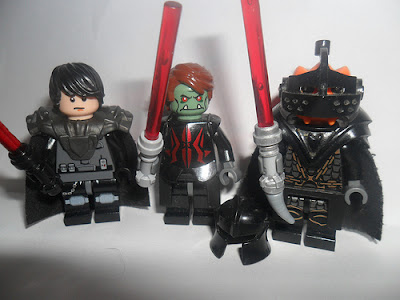 The concept of the tank-heal-damage triad in your typical MMO, including SWTOR, is so easy that a 6-year-old can understand it. It does make you wonder then, why so many people you come across in game seem to have issues with this very basic concept.

Anyway, we stumbled across this very cute blog by Jasper, a 6-year old SWTOR fan. This kid needs to meet up with my 5-year-old (soon to be 6) because I think they could really be pals. I also have a Lego/Star Wars fan in my house and this looks exactly like something my two boys would do. Both gamer fans, former WoW players and huge collectors of Lego sets, why not use the very popular toy to explain this gaming concept?

On his blog, Jasper says:
“If the tank and healers dies, um, the damage dealer will end up dying, because he doesn’t have the armour, he’s the one that whacks fast, doof doof doof doof. The tank’s job is to keep the bad guy from attacking the damage dealer, because the damage dealer if he gets hit a few times he’s dead. Tanks can take a lot of whacks but they can’t do as hard a whack     as the damage dealers.”
And if you follow the link, you can also see a photo of the setup as he explains a boss fight with Lego figurines. Too cool, Jasper, too cool!
Now maybe you can teach a few players in game a thing or two…
0
SHARES
ShareTweet