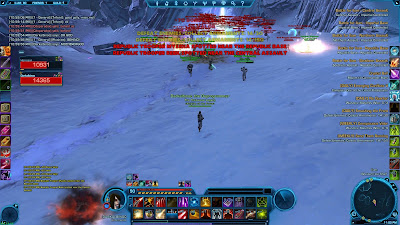 The first SWTOR update, patch 1.1 was a rocky one indeed. While there are many great things that came with Rise of the Rakghouls, there were also some bugs and issues. The biggest of which was the open-world PvP zone of Ilum. The new patch allowed the easy exploitation of this zone and some players took maximum advantage of the opportunity to farm up large amounts of Valor points.

When the patch first went live, our very own Andrew Clouther wrote in his initial impressions that the new system would fail due to server imbalance – predicting the faction with more players would crush, camp, and “make the other factions’ life hell””.
And sure enough, that is exactly what happened with this patch.
As GameZone reports:
In some cases, people were rumored to get as many as 20 Valor levels in about 4 hours of fully exploiting the glitch.  As you can imagine, this caused quite a bit of controversy from the SWTOR player-base.
Game designer Gabe Amatangelo posted on the official forums that BIoWare has found the “issue preventing this from happening under server load” and published a patch to fix it. In addition to fixing the exploit, BioWare reduced the population cap on Ilum to improve performance.
That’s all well and good but what about the players who exploited this glitch and farmed Valor? Some players are promising to cancel their accounts if BioWare does not issue a rollback on the Valor. While it’s not certain exactly what BioWare will do about it yet, we do know that they plan to do something about it.
Community manager Joveth Gonzalez did say, “We’re definitely aware of individuals who took extreme advantage of this situation and we will be carefully evaluating and taking action as necessary.”””
Read more at GameZone.
UPDATE: Just as we told you we would keep you updated on the situation, there has now been an official statement from BioWare on the Ilum PvP Issues which you will find on the community news page.
Jeff Hickman, Executive Producer – Live Services, reports:
We have made the decision not to enact a mass ‘rollback’ of Valor points for all players in the game, or even on Ilum. This would unfairly penalize some players who may not have been present during this event. Rest assured though, anyone and everyone who is found to have exploited the situation to an unreasonable degree will be investigated and actions taken as needed. Our in-game metrics are able to give us precise details on where players were, what they were doing and what rewards they gained.
We take any sort of situation where one group of players gains an unexpected or unintended advantage over other players very seriously and will act to ensure that all players can have a fair and fun game experience.
So there you have it, folks. There will not be a mass Valor rollback but they will be taking action on those who were involved:
The amount of Valor granted from these activities was significantly more than intended and we are now carefully investigating players who were on Ilum during this period, and present at some of these ‘camping’ events. I can reassure you that those who were involved and who gained an unfair advantage over other players inappropriately will be carefully reviewed and action will be taken to restore game balance. This could include Valor adjustments or account actions in accordance with the severity of the issue.