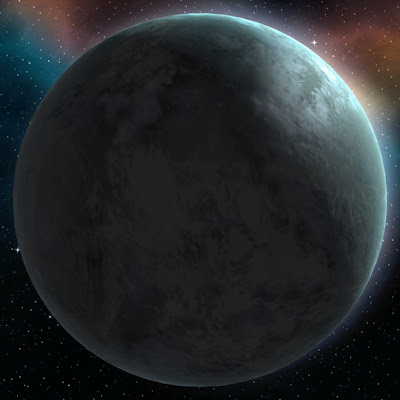 Ilum was the ice planet home to many of the Adegan crystals used in the construction of Jedi lightsabers. The caverns containing the crystals were long ago turned into a Jedi temple. Unlike the crystals of other planets, the crystals of Ilum could only produce green and blue lightsaber crystals.

History
Ilum was first discovered in 22,800 BBY when a Jedi, navigating hyperspace in the Force, felt a strong pull deep from the Unknown Regions. Following the sensation, the scout had found a world rich in Force-strong crystals. The mystique of the discovery added it to the ceremony of lightsaber construction.

Establishing a Temple over the Crystal Caves, Ilum became a place of great importance, as sacred as Ossus and Tython. The temple served as a shelter and place of ritual for the Jedi who traveled here. To ensure the security of the planet and the crystals, the planet had been left off of starcharts. One uninterrupted hyperjump from Metellos would deliver a ship into Ilum’s orbit, and could only be accomplished by a Force-sensitive.

As part of his training, Anakin Skywalker, along with his mentor and friend Obi-Wan Kenobi, traveled to Ilum so that Anakin could build his first lightsaber. The two faced multiple challenges in scaling the slopes that lead up to the cave, including running into a nest of Gorgodons. Upon entering the cave, Anakin first faced Darth Maul’s ghost before finally completing his lightsaber. Obi-Wan Kenobi also went there when he was young with his master Qui-Gon Jinn to build one of his first light sabers.

Because its existence was not known generally to non-Jedi, Ilum was virtually forgotten after the destruction of the Jedi and Palpatine’s information purges. This gave the remaining Jedi a safe harbor. After Order 66, Obi-Wan Kenobi received intelligence that his friend, Jedi Master Garen Muln, had returned to Ilum to hide in the crystal caves. Ferus Olin, a former Jedi apprentice, returned to the caves to retrieve crystals to build a new lightsaber. He also found Garen. The Jedi had grown weak. He gave Ferus his old lightsaber, which needed new crystals. Ferus inserted his crystals and carried the weak Jedi Master out of the caves. Obi-Wan came to their rescue before the Imperials could take them hostage. Another Jedi also took refuge there: Fy-Tor-Ana. However, according to Garen, she returned to Coruscant to see if any other Jedi had survived. She did not return, but it was rumored that she was imprisoned on Coruscant.

During the Empire’s hunt for Moff Kalast, who was leaking information to the Rebels, they discovered a Pirate base above Ilum, where Boba Fett (in the Slave I) tried to disable their sensors so an Imperial fleet could capture the Pirate Leader.