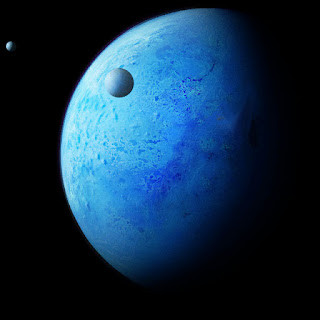 The Unknown Regions, Unknown Space, Unknown Sector, or Unknown Territories was the collective term for all regions of the galaxy not formally charted; it differed from Wild Space in that Wild Space was usually minimally charted, but not fully explored.

The Unknown Regions was broadly defined as areas not connected with the skein of reliable or well-known hyperspace routes spanning the galaxy, did not look to Coruscant as the ultimate center of civilization, or were not under the broad hegemony of the Galactic Republic before the Galactic Civil War. Beyond the region’s outer edge lay the hyperspace disturbance beyond the edge of the galaxy.

History
he reach of civilization extended at least nominally to the edge of the galactic disk—for instance, the territory of the Corporate Sector extended to the end of the Tingel Arm. The galactic disk and some satellite galaxies were mapped well enough that the omission of thirty-seven systems (including Kamino) from stellar charts were obvious gravitational anomalies, even when scanning from afar.

The Unknown Regions included a unique section of the galactic disk to the “galactic west” of Bakura, Bilbringi, and the Imperial Remnant. A web of hyperspace anomalies in this section known as “the tangle” impeded galactic exploration by the Republic for millennia. Important powers in this area of space included the Chiss Ascendancy, the Ssi-ruuvi Imperium, the Vagaari, the Killik Colony, and the Empire of the Hand, but it was also home to species such as the Croke, the Ebruchi and the Eickarie. Though severely cut off from the rest of the galaxy, these species interacted with one another, and had created a sort of interstellar culture separate of that of the Galactic Republic or the Empire. Communication and trade were sparse and infrequent, but species such as the Lugubraa were found in the services of larger powers across the Regions. Common threats such as Mnggal-Mnggal brought together disparate species such as the Chiss, Lugubraa, and others to combat its encroachments.

One hypothesis by a noted scientist suggested that a mass of dark matter intersected the galaxy in this region, creating gravitational anomalies that hindered navigation. However, the lack of any tidal disruption of the galaxy’s spiral form (as shown in Jedi Archives) may have disproved this supposed dark mass. Alternate theories included “hyperspatial gravitic ripples”, or the intentional construction of a barrier, possibly by the Celestials to hedge the expanding Infinite Empire or to contain Mnggal-Mnggal. What was known for certain is that the division between explored space and the Regions was almost precisely at the midline of the hyperspace disturbance that surrounded the galaxy. It was clear, moreover, that much of the Unknown Regions were passable to determined travelers—for instance, Corellian traders had been in contact with the Chiss for many years before their “discovery”., and the planet Ilum was reachable by Force-sensitive navigators.