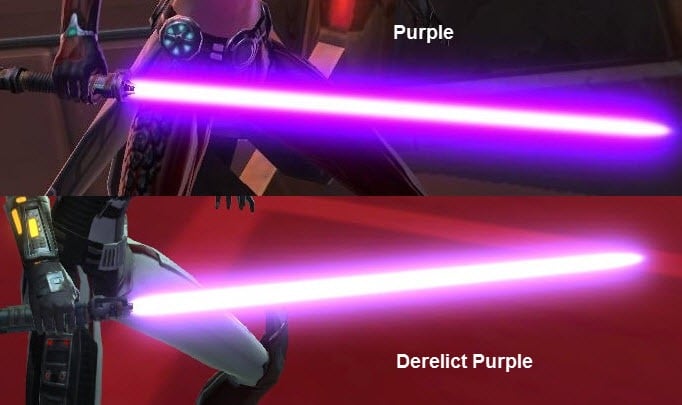 Star Wars: The Old Republic has many interesting features like the rare crystals that make your lightsaber different colors. These are fun to collect and some of them can be a real challenge. Here’s a guide to some of the color crystals in the game. Remember that these can change at any time. We will try to update the guide accordingly. Remember to check out this post on Light saber hilts.

You can find the blue, green, red and yellow crystals in Artifice. These are the most common gems so they are the easiest to locate. You can also find them in the vendor sabers gear. The orange color gems are “high level artifice” that can be reached at level 400. In Alderaan, the orange crystals drop from Ulgo Siegebreaker, Corusant Worldboss and Nar Shadda Worldboss.

There are four black core colors in the game. You can get the Black Blue and Black Red core color gems from Republic Rakata Gearand at the Battlemaster PvP vendors. Keep in mind that these can’t be removed on Battlemaster so consider that before obtaining one. The black yellow crystals are the “pre-order bonus” ones and you can get the black green gems as a bonus for the Razer TOR hardware.

Purple and cyan are two very rare crystals and cyan is listed as “Light blue” so you know what to look for. You can obtain the cyan gem from Columi gear but if you get it from the Champion version, you cannot remove it.

You can obtain the purple gem from Empire Columi Gear, by means of Hardmode Eternity Vault and from PvP Champion sabers. However, you will not be able to remove these crystals either. You may be able to acquire the purple and cyan gems from 8/16 man operations in Karagga’s Palace and Eternity Vault but these drops are very rare.

One of the rarest gems is the Magenta Crystal. It’s so rare that Georg Zoeller, a SWTOR developer, gave players a hint as to how to find it. While Bioware acknowledges that it does exist, they have a post explaining that you cannot acquire it by use of Reverse Engineering.

There is a rumor going around that you need to reverse engineer some of your endgame gear to get a schematic and this is simply not the case. Instead, you need to follow a few steps before you can retrieve this crystal.

The Magenta crystal, sometimes referred to as “Light Red”, is the hardest to find because there are several things you have to do before you can get one. For example, you’ll need a schematic dropped by “The Primal Destroyer” and you or someone you know must have the Artifice Crew skill. This Belsavis World Boss will actually drop three different schematics. The one you retrieve will determine if you can craft the Advanced Magenta Resonating Crystal, Lethal Crystal or the Intrepidity Crystal.

Once you have your schematic, head towards Tattooine. Here, you’ll need to find a Moisture Vaporator, which is scattered around the Jundland area and around the outpost of Rennar. When you find one, there should be a blue glowing panel at the base. Click on this and the Vaporator will give you a “Refreshed and Sustained” buff. If you don’t see the panel, you can look for another one or wait for one to appear. They do have a long cool down period.

After receiving your buff on your buffs bar, go to the highest mountain point in Hoth. Climb up the mountain until you get the debuff. This freezes the water you received from the Vaporator and turns it into “Pure Shockfrozen Water”, which will automatically go to your inventory. Now, it’s time to head over to Illum to finish up your journey.

When you reach Illum, you’ll need three or four friends to help you out. They need to be at least a level 50. Look for the “Depleted White Adegan Crystal Node”, which can be found on the west side and when you find it, click on it. A “Force ghost” will emerge from the frozen water. After you defeat the ghost, you can loot the Magenta Adegan crystal. However, it could be several feet away, so you’ll have to search for it.

This gives you everything you need for someone with the Artifice Crew skill to craft the Magenta crystal.

Do you know of any color crystals we have missed here? Let us know in the comments.