There have been several accusations of bias on the part of BioWare in SWTOR. Some were said in jest but others seem to have some real backing to them. Could there be a legitimate case of favoritism towards one side? While BioWare insists that this is not the case and that they created the game with balance to both sides, here is some evidence that Republic has better color crystals than the Empire for lightsabers.

This is actually the case for several weapons, especially if they have the same name for both sides. Here we can see that Empire players get the Q48 crystal but Republic side gets the Q56 crystal. There are other instances of this in the game. 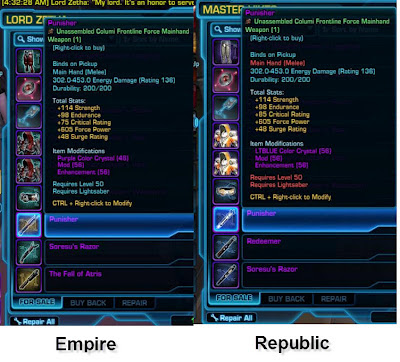 Do you feel like the Republic has better color crystals in the game? What about just better gear/weapons overall? Are there any other cases where you think that maybe there is some imbalance or favoritism in the game? Do you have screenshots of similar gear imbalances or discrepancies? We want to hear from you.

Or maybe you’re on the flip side and you think there’s just too much being made of this and it’s really only a matter or opinion of which side is “better”. Weigh in with your thoughts!