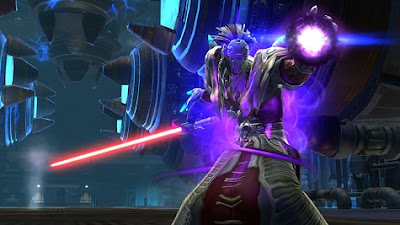 One of the biggest questions gamers have when they reach level 50- the maximum level- is what to do next. How do you get geared up? What is there to do in endgame? SWTOR is still a new game so there is not a lot of advice or “common knowledge” in the gaming community yet about what to do. In fact, many players are leveling to the cap and then stopping because they don’t know what to do next or there are not enough people playing to do anything with.

But you can bet that as the game has been out longer and more and more players get into it and reach the level cap, there will be more gamers to play with. So you can start right now getting geared up so you’re ready to go and you will be a few steps ahead of others, giving you an advantage.
So here are some tips on endgame gearing for Empire players:
Do Your Dailies: First, do your daily missions. These repeatable quests can be done once a day and they will give you some decent credits- usually between 7,000 and 14,000 per quest and they will also award you Daily Commendations that you can use to purchase gear such as Rakata level implants, armoring and hilt/barrel and earpieces. You can turn in these Commendations for gear from the mission support vendors found in the Ilum base.
Here are all the dailies on Ilum/Belsavis:
Ilum – 8 Daily Commendations
– Ilum base
– Imperial Waystation
Belsavis – 17 Daily Commendations
– Imperial Domination Outpost
– Deep Launchpoint Transporter
– Signal Monitoring Center
– Tunnel north of Signal Monitoring Center
Flashpoints (Hardmode): Your next opportunity for getting gear are the hardmode flashpoints. This is the next logical step after getting geared up with dailies. There are six hardmode flashpoints available to the Empire:
PvP: Finally, you can do PvP for endgame gear. This s actually a fast way to gear up and get the Champion level PvP gear. You do this by getting Champion Gear Bags in one of five different ways:
Operations: Now another option is Operations. These are the SWTOR version of raids and there are two versions- 8 mans and 16 mans. Each has three tiers of difficult levels to choose from- normal, hardmode and nightmare. So once you complete Operations on one mode, you can go back and do them again, increasing the difficulty levels.