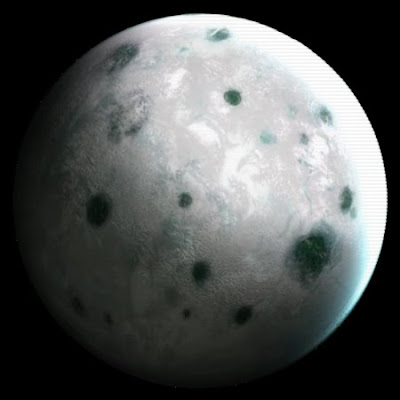 Belsavis was a planet in the Ninth Quadrant, which was a region of the Bozhnee sector. Ice-covered, its average temperature was in the -50s. It was located on the Belsavis Run.

Old Republic era
At some unknown point in the past, the planet became one of the many worlds that belonged to the Rakata Infinite Empire. During that time, the Rakata made use of the world as a prison colony where they placed many dangerous prisoners that remained trapped for the millennia. It entered an ice age around 5,000 BBY. Its inhabitants dwelt in three volcanic jungle rifts.

Plett’s Well, was settled 88 BBY by Jedi Master Plett, and came to be called simply Plawal. The main Republic colonization of the planet occurred 20 BBY, with many plants and animals being imported from Ithor.
Settlements on the icy surface of Belsavis

The bounty hunter Jango Fett was once captured and imprisoned in an underground labyrinth on Belsavis. Although pursued by kretch insects, he managed to escape by figuring out the internal logic of the maze.

In 19 BBY, Plett hid a number of Jedi younglings in Plett’s Well from the Great Jedi Purge, but the Galactic Empire sent the Eye of Palpatine to bombard Plawal. Fortunately, Jedi Knights Callista Ming and Geith sabotaged the Eye, but Plett and the Jedi younglings were forced to flee the planet regardless. Some of the younglings, such as Roganda Ismaren, were captured by the Inquisitorius.

Around 6 BBY, the Imperial Governor stationed a few tariff police on the world to deal with increased smuggler activity. Around 0 BBY, Brathflen Corporation and other fruit-companies established domes around the world. At the time of the Battle of Hoth, Mara Jade visited to the world to investigate the rumors of the Jedi fugitives.

New Republic era
In 12 ABY, a large shipment of Tenloss Disintegrator rifles was to be shipped to Belsavis, but the cargo was stolen on Nar Shaddaa. New Republic Intelligence was informed of the thief, but were unsure why the munitions were heading there in the first place.

The planet allied with, but did not join, the New Republic, maintaining independence. Later in 12 ABY, Roganda Ismaren later attempted a coup against the New Republic on Belsavis, attempting to make her son Irek Ismaren the new Emperor with financial backing from treacherous nobles from the neighboring Juvex Sector and Senex Sector, using Irek’s abilities with mechu deru to control the Eye. Roganda was foiled by Luke Skywalker, Callista, and Leia Organa Solo.

Republic knowledge of Belsavis predates the Great Hyperspace War, but for centuries, the planet warranted little attention. With the exception of some unusual volcanic activity, the planet was deemed, in all ways, unremarkable. Belsavis was added to the star charts then summarily dismissed as nothing more than another curiosity of the Outer Rim.

Fifty years ago, while investigating the planet’s tropical rifts that seemed to defy the ice shelves in completely unnatural ways, Republic scientists stumbled upon an ancient prison constructed by the Rakatan Empire. Behind the force fields and ultra hard metals were the most terrifying prisoners in the galaxy. Republic efforts to explore and secure the dilapidated network of vaults were impeded by ferocious alien species, and nearly unstoppable droids.

Realizing it was only a matter of time before the vaults and stasis chambers containing the worst of these prisoners failed, the Republic committed a force to maintain the complex, and establish a new Republic prison on Belsavis’ unused surface. In secret Strategic Information Service meetings it was decided that this new prison, dubbed “the Tomb”, was only to be used in cases where execution was impractical or impossible.

Once the Great War erupted, the Tomb’s population rapidly increased. Mandalorians, Sith Lords, and creations of Sith alchemy were sent to Belsavis for containment. As rumors of the Tomb’s existence spread, Imperial Intelligence began searching for the legendary super prison. Despite Republic efforts to keep its location a secret, the Empire learned of the operation on Belsavis and sent strike teams to liberate all the imprisoned Sith.

In the short time since the Imperials arrived, the prison grounds have been transformed into a labyrinth of battle and chaos. The Empire has discovered that extracting its loyal subjects from among their violent fellow inmates will not be easy, and even though the Republic is rushing to restore order, the threat of the mysterious evil breaking loose from its ancient prison is becoming all too real.