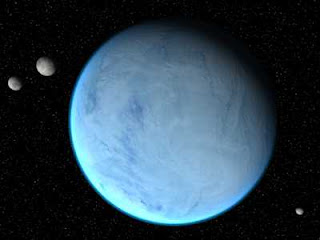 Hoth was the sixth planet of the remote Hoth system. A desolate world covered with ice and snow, located in the Anoat sector, a rarely-traveled portion of the Outer Rim Territories, it became famous as the one-time location of the Alliance to Restore the Republic’s Echo Base during the Galactic Civil War. It was discovered in 3 ABY by the Empire, causing the Battle of Hoth, a major engagement that destroyed the Rebels’ base and gave them heavy casualties.

Description
Located on the fringe of the Ivax Nebula in the Anoat Sector of the Greater Javin along the Ison Corridor, Hoth orbited the blue-white star Hoth on a wide elliptical orbit. Beyond Hoth was a large asteroid belt, known as the Hoth Asteroid Field, from which small asteroids regularly broke off, crashing onto Hoth’s surface as meteorites. The planet consisted of a molten metallic core with dichotomous crust. Its surface was entirely covered by a frozen ocean, except where volcanic fissures opened up steam vents, depositing rock and minerals in darker patches on the glacier plains. A few mountain ranges pierced the permanent ice shelves, some being geologically active. The tidal pull of Hoth’s three nameless moons caused fissures in the ice-layers, sending jets of ocean water into the freezing Hoth air. The intense cold froze these jets into spires of ice, suspending primitive ocean algae within these tall columns and glaciers. Massive oceanic currents beneath the southern hemisphere caused regular seismic activity, resulting in a constantly shifting landscape of caves and tunnels. Buried deep in Hoth’s equatorial region was a fissure, reaching hundreds of meters towards the core of the planet. In this area never exposed to Hoth’s blue-white sun was a cache of lumni-spice, a rare fungal growth.

Its orbit and axial tilt resulted in consistently icy weather patterns. Daytime temperatures reached levels unbearable to most species and rarely rose above freezing, even in the planet’s relatively mild equatorial regions. The gale force winds and intense snowstorms that regularly wracked the windswept surface magnified the extreme cold of Hoth.

The frigid biosphere included a minimal food chain: the predator wampas, the omnivorous tauntauns, the herbivorous Hoth hogs, a few rodent species, including snowmice and ice scrabblers, and iceworms, lichens, and Dragon Slugs. 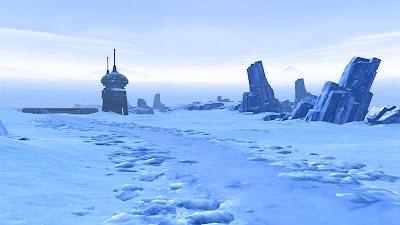 History
Hoth’s existence was known throughout the galaxy as early as 4,000 BBY. The swamp wampas of Dromund Kaas were proven by scientists to be descended from the wampas of Hoth. It is possible that wampas were brought to Dromund Kaas during the Great Galactic War though the truth remains a mystery. Indeed the Republic suffered a major defeat at the hands of the Empire during that conflict. The two fleets included some of the most advanced warships available, and the Republic lost several valuable prototype vessels in the engagement. The battle showered the planet’s surface with hundreds of shipwrecks, but neither side possessed the resources to recover them. By the time of the Cold War, pirates began efforts to salvage the wreckage, but their efforts were contested with the onset of competing efforts by the Republic and Empire.

Hoth again became a battlefield in the New Sith Wars, During that conflcit, a battle occurred bewteen Jedi and Sith forces on the ice world. 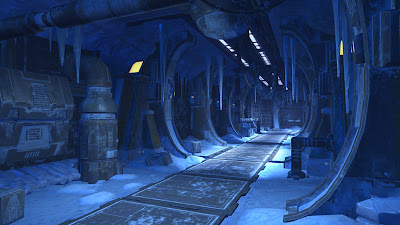 The planet was not entirely unknown to the galaxy at large. The trans-system data storage library on the planet Halowan contained a substantial amount of information concerning the Hoth system and the planet’s geography. While still relatively unknown and rarely visited, Hoth was occasionally frequented by pirates and smugglers who took advantage of its remote location, using the ice planet as a base. Even prior to his inclusion with the Rebellion, Han Solo was already familiar with Hoth from his days as a smuggler. The Mon Calamari smuggler Salmakk and his crew used one of Hoth’s ice caverns as a base for several years prior to the Alliance’s presence there. He and his group were chased away from Hoth by Solo after failing to capture him, hoping to collect the bounty placed on his head by Jabba the Hutt. The smuggler Raskar, leader of the Pirates of Iridium, attempted to seize a valuable cache of lumni-spice before the Alliance settled on Hoth, but was chased off by a dragon slug. A group of failed stormtroopers attempted to start a hunting business there, but were all supposedly killed by a group of wampas. 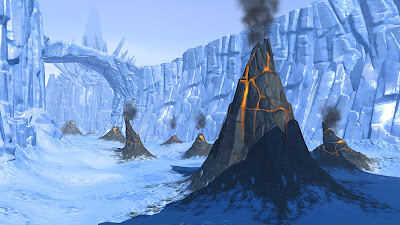 The Alliance first learned of Hoth when then Lieutenant Commander Luke Skywalker and C-3PO crash-landed on the planet. After the last remnants of Rebel forces evacuated the Yavin system, Skywalker made a daring escape through the Imperial blockade of Yavin 4, plunging his ship into the vapor-trail of a transdimensional cometary body. His starship was caught in the hyperstream of the comet, and was dragged to the Hoth system. Skywalker was saved from certain death after being trapped in a Hoth blizzard by a young woman named Frija Torlock. Skywalker was given sanctuary by the woman’s father, Lexhannen Torlock, an Imperial governor. However, he soon learned that the two were in actuality human replica droids of the real Torlocks, hiding from the Empire on Hoth. Fearful of organic beings, the elder Torlock intended to kill Skywalker. However, in the attempt, he accidentally shot and destroyed his daughter. He was then cut down by the young Jedi’s lightsaber. Skywalker and C-3PO managed to escape the planet after sending a transmission, answered by Han Solo aboard the Millennium Falcon. He later recommended Hoth to Alliance High Command as a possible relocation site. 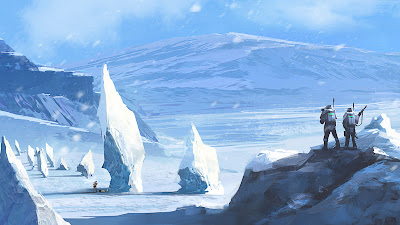 Shortly after the Battle of Yavin, the Habassa also hinted to the Rebellion the Hoth system as a possible candidate for relocation.

The Rebellion’s first official involvement on Hoth came in 1 ABY when Alliance High Command agreed to use the planet as their headquarters. The Alliance Corps of Engineers, under the command of Major Kem Monnon and supervised by Major Bren Derlin, descended on the ice planet to begin construction of High Command’s new base of operations. Monnon’s engineers took over the remains of the caverns once used by Salmakk for his smuggling operation, expanding the facilities considerably. The base was built in the northern hemisphere on the only livable temperate band near the equator. Construction on the new Echo Base was completed in 2 ABY. Aside from its remote location and near unbearable temperatures making it an unlikely candidate for Imperial probing, Hoth was an ideal location because of the asteroid belt that surrounded the system, providing a difficult barrier for approaching ships.Additionally, the ever shifting caverns meant that it would be easy to move the base within the planet. 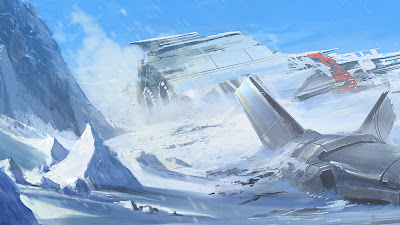 The Rebellion operated out of Echo Base for about one year before it was discovered by the Empire in 3 ABY. An Arakyd Viper probe droid, launched to Hoth from the Imperial II-class Star Destroyer Stalker, attached to Darth Vader’s Death Squadron, reported the location of the base to the Imperial Navy. Vader and his fleet of Star Destroyers soon arrived in Hoth’s orbit, deploying a large invasion force to the planet’s surface. The Battle of Hoth ensued between the two forces, resulting in a crushing Rebel defeat. Those Rebels lucky enough to survive the battle evacuated the planet. The debris of the battlefield attracted the scavenger Arns Grimraker.

During the battle, a group of eighteen Rebels deemed most valuable to the Alliance’s cause jettisoned from the disabled GR-75 medium transport Bright Hope back to Hoth’s surface aboard an escape pod. They were forced to survive on Hoth for more than a month before a rescue party led by Commander Toryn Farr was dispatched to recover them. 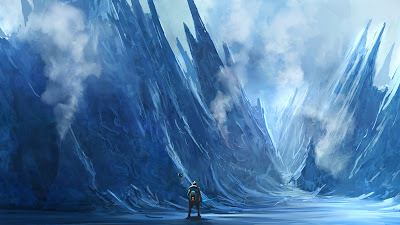 After the ground battle in 3 ABY, Hoth returned to a world of obscurity, visited mostly by poachers, smugglers, xenobiologists, and the occasional tourist. An Imperial Correctional Center was established on the planet, which became known for its harsh conditions; it was said no inmate survived more than three years there before freezing to death. In 5 ABY, the imposter of Kadann sentenced Grand Moff Dunhausen to four years imprisonment at the Center. The Empire captured numerous wampas and from their base stock bioengineered the cliff wampas which the Imperials used to guard their facilities on Gal