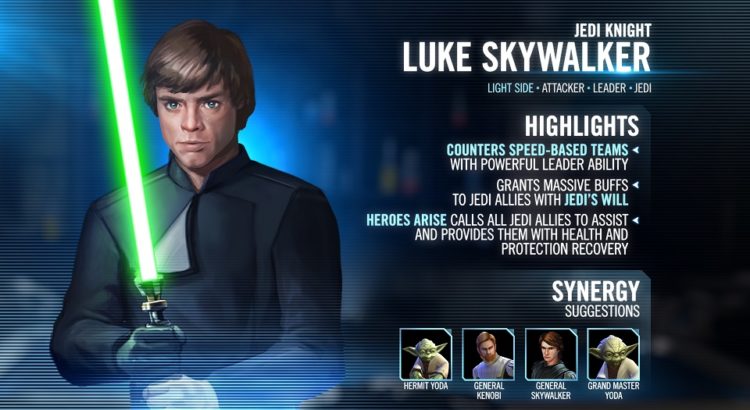 One of the most anticipated characters in Star Wars Galaxy of Heroes, Jedi Knight Luke Skywalker, is coming to the game very soon! Here is the break down. You can find the kit reveal in the Arena and Character Strategy section of the forums or read on below to find out more.

UNIT NAME: Jedi Knight Luke Skywalker
ALIGNMENT: Light
CATEGORIES: Attacker, Light Side, Leader, Jedi
Stalwart Jedi hero of legend who ascends to victorious heights alongside his Jedi allies through the will of the Force

FINAL TEXT: Deal Physical damage to target enemy and call another target ally to assist. Target enemy is inflicted with Blind for 2 turns.

FINAL TEXT: Inflict Stun for 1 turn and Vulnerable for 2 turns on all enemies. Until end of encounter, all enemies lose 10% Max Health and Protection (stacking, max: 50%).

This ability can’t be evaded or resisted.

FINAL TEXT: Each time Jedi Knight Luke Skywalker is damaged, he gains 5% Turn Meter and 5% Offense (stacking, max 25%) until he he uses Prevailing Strike on his turn. When he attacks out of turn or is critically hit, he gains 2 Speed (stacking, max 20) until end of encounter.

Jedi Knight Luke Skywalker is immune to Stun and Fear.

Leader: (ZETA) The Return of the Jedi

FINAL TEXT: All Light Side allies have +15% Critical Chance and Critical Damage, doubled for Jedi allies.

At the start of each of Jedi Knight Luke Skywalker’s turns, all enemies are reduced to his base Speed until end of encounter, and their Speed can’t be manipulated after their Speed is set (his base value is recorded at the start of encounter before any buffs or debuffs are applied). This leader ability does not affect Raid Bosses and does not activate if the enemy side also has a similar ability or a Galactic Legend.

This ability is on a shared cooldown between allies who have Heroes Arise and is immune to cooldown manipulation (Cooldown: 10).

Despite his humble beginnings as a moisture farmer on Tatooine making runs to Tosche Station for power converters, we always knew Luke Skywalker was destined for greater things. His victory over Jabba the Hutt was a mere hint at the strong bond Luke shared with the Force as a Jedi Knight, a lesson the Empire would later learn firsthand during the Battle of Endor. Luke’s leader ability, Return of the Jedi, helps to restore balance to the Force by granting bonuses and dispelling negative effects from allies, while also reducing all enemies to Luke’s base Speed.

If Jedi Knight Luke attacks out of turn and uses his Basic, does the Offense and Turn Meter from Jedi Knight’s Resolve reset?

Is Jedi’s Will applied before or after the assist when using Special 1: Stalwart Advance?

Does Jedi Knight Luke Skywalker reduce the enemy’s Critical Damage when attacking out of turn?

Can Heroes Arise be blocked by Ability Block?

What happens when two Jedi Knight Luke’s face off against each other?